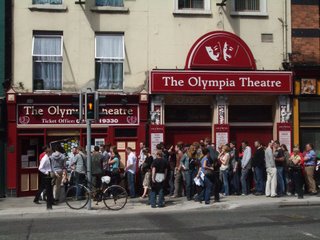 By the time I get back from Dublin, the Lowdham Book Festival will be over. John Lucas’s launch and party last weekend were great fun and Wednesday night’s MA sponsored event with Daljit Nagra and Gautam Malkani was both interesting and entertaining. Good to put a poet and a novelist with a lot to say to each other together on one bill. Thanks to everyone who came. However, I won’t be at Lowdham Book Festival‘s final, free Saturday for the MA students’ anthology launch (10.30AM), my friend Mike’s talk on blogging and various other talks by friends and colleagues. Anyhow, seeing my favourite band in a tiny theatre for two nights tops all other calls on my time. Congratulations to Jane and Ross on their first solo promoted Lowdham. And if you’re within fifty miles of Lowdham (ten miles from Nottingham) I urge you to go – a great little festival with not one event cancelled by the nearby floods.

I’m writing this from an apartment near St Stephen’s Green. A couple of hours ago, outside the tiny Olympia Theatre, I listened to REM rehearsing their rehearsal (the five gigs are billed as a public rehearsal of new material) – at first I thought they were doing a Creedence cover but it transpired to be a new song, whetting my appetite for tomorrow night’s show. Above you can see people queuing outside for the 3PM ticket drop, designed to beat the touts. Full gig report on my return.