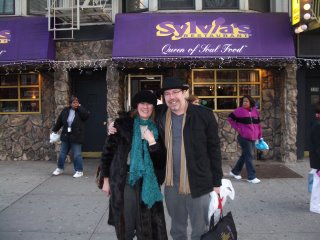 At half past one, US time, yesterday morning, five hours after we were meant to be in the air, I thought I might not be here now. Earlier, just as we were about to take off, a warning light had come on in the cockpit, and the engineers couldn’t locate the problem. They’d stripped, then rebuilt the engine and were about to test it. ‘We’re going to give it a try,’ the pilot said. ‘And if it works, we’ll be leaving in 45 minutes. Otherwise, we’re not going anywhere tonight.’

The rest you can work out. Earlier in the day, Georgina and I went shopping (like the hat?) then took the subway to Harlem, where we walked round for a while in the glorious winter light. We’d heard rumours of trendy whites scooping up cheap property, but it looked exactly the same as last time I was there, 13 years ago. And Sylvia’s soul food restaurant hadn’t changed either. I ate fried catfish, collard greens and garlic mashed potatoes with freshly baked corn bread and a Bloody Mary thrown in while listening to the gospel brunch group, including Sylvia’s daughter on vocals, all for $24 including service. A joy. If you’re ever in NYC, head over to 328 Lenox.

We were in New York for five days, presenting a panel at the AWP conference (7,000 students and academics from US university writing programs, plus about a dozen Brits) which I’ll write about tomorrow, probably. On our first day, before the conference proper began, we took the metro towards Ground Zero but boarded an express by mistake and ended up going to Brooklyn which, unlike Harlem, was greatly transformed since my last visit, hugely gentrified, with loads of restaurants and chicish shops on 5th, 6th and 7th Avenues. We walked around a lot, visited the library (interesting YA section, replete with armed cops) and, briefly, Prospect Park. I wish we’d had longer. Maybe I’ll go again when it’s warmer.

The conference had numerous parties sponsored by different programs but we only went to one when we discovered that you had to endlessly queue then pay for your own expensive drinks. But that one was worth it, because I was able to reacquaint myself with one of my favourite crime writers and invite him to contribute to a series I edit. He didn’t say ‘no’, which is a start…

The remainder of that first day is a bit of a blur. I remember watching some of the Republican TV debate, and listening to the Vampire Weekend album I’d just bought, happy to discover that it wasn’t as short as I’d initially thought, as the official version has two extra tracks. Then I went to bed with a manuscript, because I was meetings its author for lunch the next day.