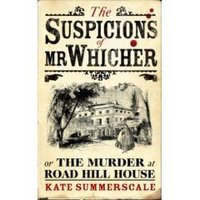 This week I’ve read two books that stuck in my mind. I picked up The Suspicions of Mr Whicher after seeing it discussed on Late Review. It was as engrossing as the panel suggested – keeping me fully occupied on a flight to and from the lovely Polish city of Krakow. The subject is a Victorian murder mystery that fascinated and inspired Wilkie Collins (leading to ‘The Moonstone’) and Charles Dickens, meticulously told by Kate Summerscale. Today Which resident of the locked house killed the toddler? is a mystery that can be solved with a little googling, but Summerscale takes the story further and comes up with chilling suggestions.

I’ve been a big fan of the 33 1/3 series of short books about rock albums since its early days. There are over fifty now. Hardly anybody would want to read them all, but a good way in is to buy the two ‘best of’ anthologies that, between them, collect extracts from the first forty books. As soon as I read the extract from John Niven’s factional novella inspired by the Band’s ‘Music From The Big Pink’, I had to order the book. This is the story of the making of the seminal American album told from the point of view of the Band’s local drug dealer, the fictional Greg. It’s primarily the story of Greg and the the Band’s piano player, singer and songwriter Richard Manuel, who had the sweetest, most haunted voice in the group (they backed Bob Dylan on and off between 1967 and 1974). Niven takes us up to Manuel’s 1986 suicide. The other Band members have a smaller role, though Robbie Robertson, unsurprisingly, emerges as the villain. The details about Dylan are convincing and enigmatic. It’s a love story, a drug story and a Dreiser-esque American parable. Niven catches the context, the atmosphere and the importance of the Band’s first album at the time it came out. Great writing. I’ll be checking out Niven’s full length novel, Kill Your Friends, which also has a music theme.