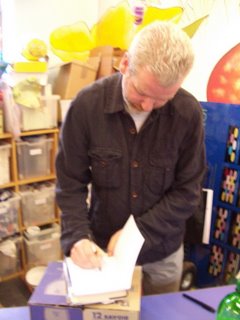 Just back from 24 hours in the European Capital of Culture where Michael Murphy (left) was launching his new Shoestring pamphlet Allotments and Deryn Rees-Jones launched her new pamphlet Falls And Finds. Michael’s pamphlet is full of poems written during his residency at the National Wildflower Centre, where the launch took place and where, after a fine reading by the couple, we had a good walk amongst the wild flowers, scarecrows and quirky ephemera. The evening also gave us a chance to catch up with old friends and remind ourselves of how loquacious LIverpool taxi drivers are, a much better ad for the city than the building site that surrounded our hard-to-find hotel. Never mind covering up the eyesores with hoardings, how about a few signs to help people locate where they’re staying, like they have in most European cities? I grew up near Liverpool and it’s great to see the city thriving, but our favourite destination was a few miles out of the city, on Crosby beach, where we spent a sunny afternoon looking at Anthony Gormley’s ‘Another Place’ figures in the shifting sands. Magic. I’ll post some photos above.