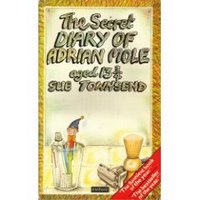 I’m writing this in the basement of the University of Leicester’s David Wilson Library, where there’s an excellent exhibition about the work of Sue Townsend, who recently donated her archives to the university (and was awarded a fellowship). Half of the small exhibition is about the origins of her best known character, Adrian Mole. In early versions of the Mole sagas, he was called ‘Nigel’ (and, briefly, ‘Malcolm’). The reason for the change was the likelihood of confusion with Nigel Molesworth, Ronald Searle’s anarchic schoolboy diarist. I remember reading the first Mole book back when it appeared in paperback in 1984, my partner and I laughing aloud on the bus. We were training to be teachers, teaching boys Adrian’s age, which made it even funnier, but the stories were (and remain) mainly aimed at adults, who read between the lines.

Sue became the best selling UK author of the 80’s. The exhibition charts Adrian’s origins well, and is worth negotiating your way into the library to see. I was privileged to get a pass to look at the entire Townsend archive, and have spent the last hour looking through the original manuscripts, correspondence and publicity material related to ‘The Secret Diary of Adrian Mole’, which began life in a small magazine then became a BBC radio play. The journey into the making of the first book is fascinating. The collection contains Sue’s literary, personal and business papers, including correspondence with publishers, agents and contemporary writers; press and magazine cuttings of reviews and interviews; and holograph manuscripts, typescripts, notebooks, printers’ proofs and illustrations for books, stage plays, screenplays and articles. Also there are the writer’s personal papers include family photographs, personal correspondence, desk diaries and ephemera. Amongst all this stuff, on the back of something else, I came across a list of possible names for the hero of Sue’s first book. Nigel Mole comes first. (“Mole’ was evidently the name of a favourite teacher, nothing to do with Molesworth – who was, incidentally, a hero of my youth.) Second in the list is ‘Adrian Vole’. I’m always telling students that names are important. How much difference would her calling the hero Adrian ‘Vole’ have made? Quite a lot, I reckon.