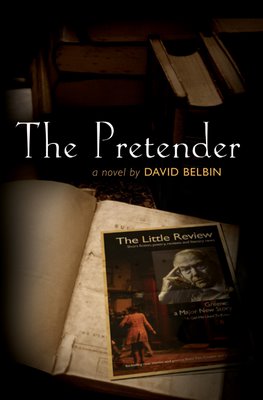 ‘The Pretender’ is about a young man with an accidental gift for literary forgery. He gets involved in the world of a small but very distinguished literary magazine. Soon he finds that the magazine is in financial trouble and the only way he can help it survive is by ‘finding’ new manuscripts by authors who have written for the magazine in the past. And he happens to have access to the typewriter that Graham Greene wrote one of his best known short stories on. ‘The Pretender’ is as much a coming-of-age novel as it is a thriller. It’s a story about writing and creativity and is my most autobiographical novel, although not a word in it is true.

I started to write a version of this story 22 years ago. It was my second novel. I’d had a dummy run, with a short Young Adult thriller called ‘The Foggiest’ and it had come close to publication. ‘The Storyforger’, as I then called the story about literary forgery, also came close to getting me an agent but was, finally, too ambitious for the writer I was then. In 1988, I started work on my third novel, ‘Don’t Stand So Close To Me’ which, at the time, was aimed at adults.

Fast forward. Eighteen years ago, almost to the day, my first novel ‘The Foggiest’ was published. Ten years ago, ten years after I’d written the first version named after the Police song, the rewritten ‘Love Lessons’ was published as a Young Adult novel. And today, my first ‘adult’ novel, ‘The Pretender’ is officially published (it’s already had its first review, on Achuka).

The novel is very different from the one I wrote in my twenties, when Graham Greene was still alive (and didn’t feature in it), but a few plot points remain. I started writing this version of the forgery story at the beginning of this century. It’s taken me a fair while to get right but now it’s done, I’m sure that it’s the best thing I’ve ever written. You can download an extract and buy it here if you care to. (This is direct from the distributors – as I write, Amazon are already out of stock).

It’s funny to think that, twenty years on, the first three novels I wrote have all found their way into print, albeit in vastly rewritten versions. It goes to prove what I always tell my students: ‘Never throw anything away. You never know when you’ll work out how get it right.’ I’m pushing this book as much as I can and will heartily appreciate any support I get – book groups, Amazon reviews, blog entries, Richard and Judy, whatever. I’ll be doing various events to promote ‘The Pretender’, starting with a launch at Bromley House Library in Nottingham tonight. More details will appear on this page. Do come along to one of the them if you’re in the neighbourhood.