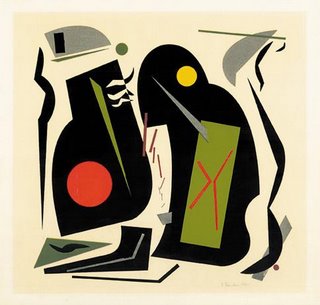 Just back from the terrific American Scene touring exhibition at Nottingham University’s Djanogly Art Gallery, where I fell in love with the screenprint on my left, Counterpoint by Edward Landon, from 1942. If anyone knows where I can buy a decent reproduction, please let me know. I know I could fork out for the catalogue and I probably will, but I’d like it on a wall and would prefer to have it in the original size.

It’s a British Museum touring exhibition, subtitled From Hopper To Pollock and it runs until the 19th of April. The range of work featured is broad and rather brilliant. You can, for instance, trace Jackson Pollock’s work as it moves from figurative to abstract expressionism. There’s an accompanying lecture series that looks really interesting. I’ll definitely be going again. Twice.