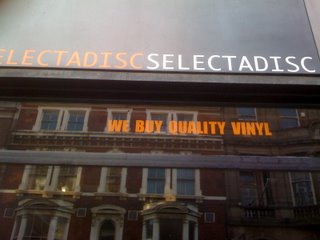 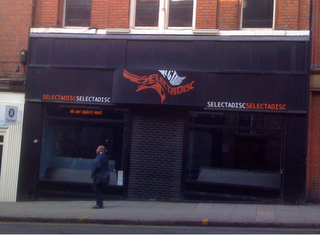 I went into town today to visit Selectadisc for the last time, but the store had already closed down, as Sue found when she took the photos on the left on her way to work this morning. I’ve been shopping at the store for 33 years. When I arrived in Nottingham it was on Goldsmith St, where the Royal Concert Hall is now. I used to flog them my spare review copies from the university paper. I spent a lot of time in the singles and second hand store on Bridlesmith Gate and latterly in the three stores on Market St, which shrank to two, then one when Jim bought the shop from its founder, Brian, a little while back.

Selectadisc was a legendary, eclectic, superbly stocked record store and I’m going to miss it a great deal. As is the city of Nottingham. I feel I ought to be writing more of a memoir of the shop or something cutting about the recession here. Or maybe some thoughtful comments about how the way people now get most of their music for free has a downside that reaches beneath record companies. But I’m too dispirited about the whole thing, I’m afraid. Do read Mike’s Guardian piece about the shop if you’d like to know more.

After my abortive trip I went to FOPP (whose survival ensured Selectadisc’s demise) and bought the only 7″ single they had on sale (Doves’ fine “Kingdom of Rust”). Where will I get my 7″s now? On Selectadisc’s myspace, the track on the player is Roky Erickson’s You’re Gonna Miss Me. Too right.