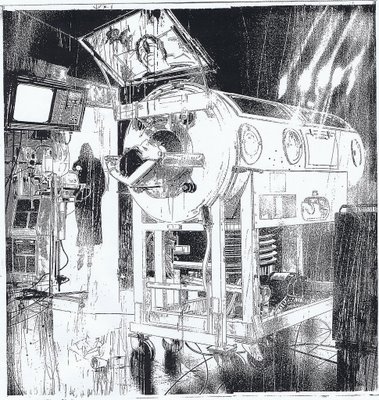 Forget ‘Watchmen’. This year’s most exciting event for Alan Moore fans has been the online publication of issue three of ‘Big Numbers’, the comic he wrote in 1990 with art by the amazing Bill Sienkiewicz (‘Stray Toasters’). Read it here.

Unfinished major works are fascinating to me, and this one especially so. That said, I can’t unreservedly recommend reading all of ‘Big Numbers 3’ if you haven’t read the first two issues. But if you have hung onto or can get hold of the first two, the third issue makes a lot more sense of the story and gives you intriguing ideas of where it was likely to go next (a tip, you might find it easier to download each page as an individual image then print it out). More information about it can be found here and there’s an interview where Alan Moore discusses the project in this interview. Here’s most of what he has to say about the fate of the remaining nine issues.

‘I’ve got the whole thing plotted. I’ve got an enormous sheet of A1 paper with the whole plot on it, almost like a graph. The idea was that we were going to produce a really good comic, publish it ourselves, we were really committed to it and it was my money that was kind of supporting the entire thing. What happened was that Bill Sienkiewicz, after promising to do it, he did a brilliant job on the first two episodes and then just seemed to stop working upon it and all the money was kind of pouring down a black hole, because we’d still got overheads but we couldn’t actually get a comic out, because the artist wouldn’t – and we kept saying “Look, Bill, if you don’t want to do this work, just tell us and we’ll think about something else, get a replacement in or something but just tell us so that we’re not just having all of our money pouring down a drain” and Bill still didn’t get up the nerve to tell us that he didn’t want to do it for another few months, by which time our situation was desperate. Then Kevin Eastman stepped in with his brave but doomed publishing venture Tundra and he was trying to produce Big Numbers. We tried to get Al Columbia, who’d been Bill Sienkiewicz’s assistant, to continue with the strip. Now, I heard that Al did an issue of it but then, depending on which story to believe, either he destroyed the artwork or took it away or I don’t know what happened but it meant that we’d had two artists sort of back out on the project.’

Interviewer: ‘So it’s permanently finished, do you think?’

Moore: ‘I don’t see any way that I can resurrect it as a comic strip. I mean, what do I do? Do I actually sort of say “Yeah, we’ve got a great new artist, are we going to start from #1 again but this time, no, buy it, because this time we really will get to issue #12.” I mean, I wouldn’t buy that if I heard it from somebody who’d kind of failed twice to do what he said he was going to do.’

The above is part of a really good interview about Moore’s whole career. On his blog, Eddie Campbell (artist on Moore’s ‘From Hell’) reveals he offered to finish the series off when the second artist freaked out. Moore didn’t take him up on it. Would a completed Big Numbers have been as big a deal as ‘From Hell’ (which Moore did with Campbell), ‘Watchmen’ or ‘V For Vendetta’? Dunno. I’m not sure the story was in the same league but the form was so innovative that it may have moved graphic storytelling on earlier. Or maybe the two issues that came out were radical enough to hint at the possibilities and influence other writers and artists. Anyway, at least I know a bit more about what was going on with Keith…