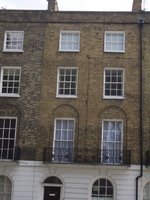 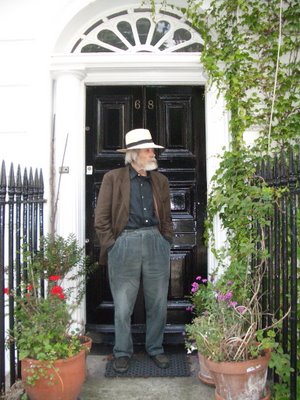 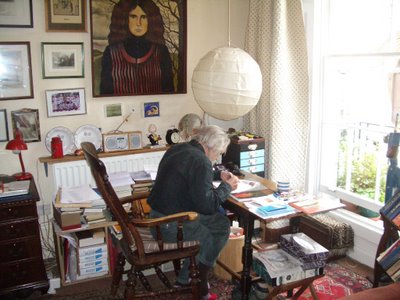 I’ve met Barry a few times but this was my first visit to his house. And, while I knew his fine poetry, I’d never read any of his novels, until the Shoestring reissue of his second, ‘Joseph Winter’s Patronage’, which I finished on the train journey to London. It’s a terrific, absorbing novel, fast moving, multi-viewpoint, beautifully written, about the rage and passions of old age, all the more remarkable given that Barry was only in his early thirties when he wrote it. The novel is dedicated ‘To Bryan’, the remarkable experimental novelist BS Johnson. For a time, Barry lived in a building (pictured above) in the square where he now lives, which was later occupied by BSJ. Nearby, a few years later, Barry was to find his friend’s body, after his suicide, which I won’t dwell on here. What I would like to dwell on is Barry’s importance as a 60’s novelist. Joseph Winter is as good a novel as the best of BSJ’s work and I mean to seek out his other three. When I asked him why he stopped writing novels in 1971, he told me that he ‘ran out of ideas’. I suspect the subject’s more complicated than he was willing to say and BSJ’s death had something to do with it, too.

After a tour of the house, with its endless artworks and 5,000 books, we spent a long, pleasant lunch in Exmouth Market, talking about Crime Fiction, poetry and Stanley Middleton, as well as Johnson. The writer Jake Arnott, whose latest novel Barry had just enjoyed, stopped by to say hello. Then I caught the bus to the South Bank, where I would again meet Barry and Rita, his lovely wife of 51 years.

I’ve been waiting for more than 32 years to see ‘Fat Man On The Beach’, the film BSJ made not long before his death. I remember being told about it by a friend when I arrived at university. The friend embellished the story by saying that it ended by BSJ walking into the sea (which he does) as though killing himself (not really, but Reggie Perrin connections are inevitable) and this was how he did die (it isn’t). The film was how I first heard of Johnson, whose work I have read and reread over the years, beginning with ‘Aren’t You Rather Young To Be Writing Your Memoirs’ and ‘House Mother Normal’, then his suppressed (he thought it too conventional) first novel ‘Travelling People’ (which Scott is hoping to republish with The Friday Project). Stanley Middleton lent me a couple (including the brilliant ‘Trawl’) I hadn’t tracked down, but it wasn’t until this century I got to read the famous, randomly organised, book in a box, ‘The Unfortunates’, set in Nottingham, where I live.

It was the short film about ‘The Unfortunates’ which Johnson made for the BBC’s ‘Release’ programme that was the big surprise for me last night. Amazing archive footage of Nottingham in the late 60’s and Bill Hoyland (who appears in most of the films) reading from the book, BSJ in Yates’ Wine Lodge, watching the same aged trio of musicians that were there when I arrived as a student. Barry found the two hours of films (donated to the BFI by Johnson’s widow, Virginia) rather long but I have to say that, from my point of view, the seven films shot by. Strange to see a handsome, raffish young Barry playing a teacher in BSJ’s first film, ‘You’re Human Like The Rest Of Them’ (pictured above, with William Hoyland). There was a fascinating 30 minute film about BSJ’s namesake Samuel Johnson (who has a table to himself in the British Library exhibition) which showed that BSJ could do smart, articulate arts coverage. That said, he included in it little flash messages like ‘All publishers are parasites!’ to add humour and some vitriol to the proceedings, which were first shown on ITV on a Sunday lunchtime.

And finally, at last, to ‘Fat Man On A Beach’, directed by Michael Bakewell. Johnson has put on weight but still looks surprisingly youthful. And he doesn’t put on any poses. This is the Johnson I know from the purest voice of the novels and essays, with an added, relaxed wackiness and a lot of bananas (!). Jonathon Coe (who introduced the evening, wrote the notes and is largely responsible for the revival of interest in BSJ) writes about the film at great length in his terrific biography of BSJ, so I won’t describe FMOTB in great detail here, but it was fascinating and moving and ought to be available on DVD (Scott has tracked down a youtube extract and you can see it on his blog entry about the evening). Maybe it will be. Virginia Johnson has also donated all of BSJ’s archive to the British Library who are holding a one day conference about BSJ with Coe, Zulfikar Ghose and many others on October 12th which, were it not the first day of term, I’d love to attend.

And that’s it for this month. Here’s a silly little story I wrote for Barry’s 70th birthday festchrift. I’ll be back in two weeks time with what has, in previous years, proved by far the most popular feature on this website, my Glastonbury Diary. This year, with added camper van!