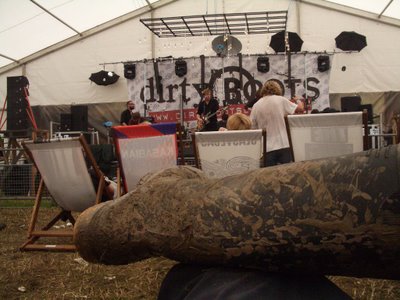 The rain puts paid to our going out early. Fran conjures up tea and bacon sarnies before we head into the festival, through plenty of big puddles, wearing wellies. There are new stages since I was last here – the Queen’s Head, which is mostly a disco, and ‘Dirty Boots’ where bands play every hour but are not listed in the programme. You have to check the blackboard. We head up to the John Peel stage to see Fucked Up (I fancied a bit of Regina Spektor first but was outvoted – it’s a longish haul to what used to be the New Bands stage). They make a lot of noise. Their frontman is a very shouty exhibitionist. He entertains the crowd in every possible way, stage-diving, concluding the set from the back of the tent. ‘We’re the heaviest band at Glastonbury this year!’ he announces, which may well be true, unless you count Spinal Tap…

At the Dirty Boots stage I bump into one of my second year students, then grab a deckchair to watch Broken Records. That’s my dirty wellington boot you can see in the photo above, indicating the amount of mud onsite. They start off a bit Arcade Fire, then go a bit Waterboys on me (I thought they were Canadian but they turn out to be from Edinburgh). It all comes together into a tuneful, rather joyous noise at the end. All four of us enjoy it, then wander off to kill some time before the Fleet Foxes, who impress everyone. I’ve seen them before and they seem very nervous in front of such a big crowd, but sing beautifully. They go down a storm (happily, without a storm, it remains dry) and then we go back offsite for a rest. I’d have liked to see Lily Allen, but her set is bound to be on telly, so I settle for hearing her from a distance.

We return in what should have been good time for The Specials but Security choose the most outlandish looking of our number for a complete body search (which he has to endure again the next day – this is not the idealistic free for all Glasto of previous decades) making us late. The Specials have just finished Gangsters when we arrive. They’re enjoyable, but it doesn’t compare to seeing them at Sheffield Academy on the second night of the reunion tour, which was outstanding. Fran and Chris go off to see The Horrors, who they enjoy, while Rich and I push our way forward to get a good spot for Neil Young. We get up close, although I keep being poked by the bloody portable chairs that so many people carry on their backs (and some insist on setting up in the middle of the crowd).

Neil is Neil. Best sound I’ve ever heard at a festival. Good setlist, a bit too heavy on hits for a diehard like me. He opens with ‘Hey Hey My My’ with its line ‘the king is dead but not forgotten’ which is as close as any of the acts I see gets to paying a tribute to Michael Jackson. He only plays one number off his throwaway new album. He plays too many false conclusions to songs and, by the end of the encore, the Beatles’ ‘A Day In The Life’ has ripped all the strings from his guitar. A dramatic performance, as good as I’ve seen him give. Rich and I get a pint then head back to the Hymer, where Fran and Chris join us shortly afterwards. We shoot the breeze for a couple of hours. It doesn’t rain. Result.