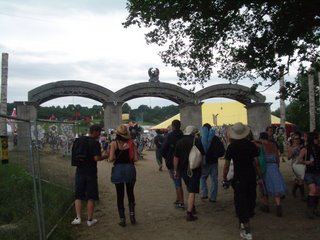 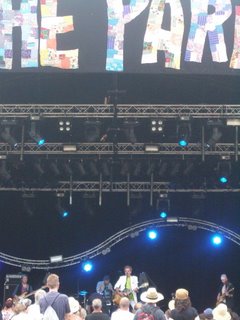 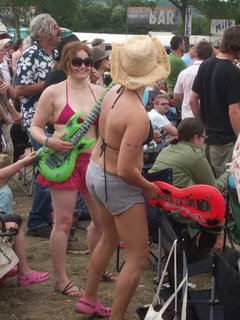 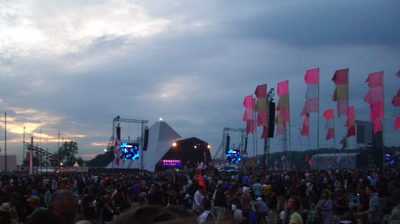 In the camper van, nobody is stirring. I head over to the next field and buy myself a bacon and egg bap with a mug of tea. The tea tastes disgusting, made with heavily fluoridated water, but the bap is brilliant. I ring my mate Rob over in the family field but fail to get through. So I head into the site and catch the end of the midday headliner on the main stage, Status Quo. In 1973 I had a ticket to see Status Quo and somebody nicked it from me (I know who, but there are libel laws). Thirty six years later, here they are playing ‘You’re In The Army Now’, which is a miserably bad song. Still, I get to hear them do ‘Down Down’ and John Fogerty’s classic ‘Rockin’ All Over the World’ (I saw Bruce play it as an encore in 78, and the Quo opened Live Aid with it), which is nice. And I got a nice photo of two girls playing air guitar, above.

Next I went to the Jazzworld stage to see Linda Lewis, who I last saw supporting Cat Stevens in 1974 (unusually, she was in between his two sets, meaning that Stevens suffered from the crap sound for the first act syndrome – evidently they were going out with each other at the time, which may explain it). She doesn’t do the one song of hers I remember, Cat’s ‘Remember The Days Of The Old Schoolyard’ but she does pay a tribute to one of my great heroes, a Glastonbury legend, John Martyn (he appears in my Glasto novel, ‘Festival’) by playing ‘May You Never’. ‘John was a great bloke,’ she says. ‘Always legless.’

Rich texts to say that the Other Stage is running everything half an hour early, so he’s just missed Art Brut. I explore the circus and cabaret field, where I see John Otway for the first time in – oh, at least 28 years – I saw him with Wild Willy at my first festival, Chorley Wakes, in 77 and interviewed him afterwards. I still have a signed copy of their first LP that they gave me there. His shtick these days seems to be comedy reinterpretations of well known numbers like ‘Don’t Let Me Be Misunderstood.’ Oh well. I’ve arranged to meet Rich in the Park field, which is a long slog, but he’s already there, and I’d like to see jazz legend Terry Riley. Or is it blues legend, Terry Reid? We’re not sure, until Reid comes on stage.

It’s a nice area, which you can see in the top two pictures above, and they still have real ale left (the better beer holds out well at some bars this time – last time, everything good was gone by Saturday night). We watch Reid do four numbers, each better than the last. I try to remember which superband he nearly joined, but fail. Rich is less impressed and wants to see the Yeah Yeah Yeahs – we’ve arranged to meet Fran and Chris there. So off we go (Reid, it transpires, turned down Robert Plant’s job in Led Zeppelin and Ian Gillan’s in Deep Purple, so the man has no commercial inclinations whatsoever – no wonder he was playing to a hundred people at the outer edge of the festival!).

We’re not working hard on spots from now on – it’s chill out time and the four of us have decided to stick together for the rest of the festival. We watch the YYYs (passable, but not really that interesting) and Bats For Lashes (ditto) from a distance, gorging on enormous burritos. Rich and Chris go over to see Nick Cave, but Fran and I are keen to see Bon Iver, who I picked up on early last year. He’s excellent, despite the loud dance music drifting over from The Glade in the quiet parts. Heavier than on the album, of course. Good dynamics. The crowd sing/scream along on Wolves (which you can see the video of by clicking on the last link) makes for a stirring conclusion. But I’m with the girl next to us, who keeps yelling for album closer ‘Re:Stacks’. He should have played that. Interesting to see that this artist, while heavily adopted by the Uncut/Mojo crew, actually drew the youngest crowd I was part of. Justin’s band has seriously crossed over and it’ll be very interesting to see what Bon Iver’s next full album is like.

I’m a Nick Cave agnostic. I see what people see in him, but can’t get worked up by any of his stuff. The only exception is the song There She Goes (my beautiful world) which I loved so much when I got it on a sampler, I put it on our best of year cd a few years ago. Fran and I arrive in time for his last four numbers. First up is her favourite, The Mercy Seat, then mine, the aforementioned There She Goes. He does a couple more of his big biblical numbers then he’s off. By my reckoning, this makes it the perfect Nick Cave experience. Rich and Chris enjoyed the whole show.

We amble over to get a drink at our favourite bar (Solidarity) and and are joined by Rich and Chris. Off we go to watch Blur.

Now I’ve seen Blur twice before, in ’92 and ’97. They were good both times but I could have easily passed on seeing them again. In which case, I’d have made a big mistake, for Blur were awesome. Usually, for the last night, the crowd thins out a bit, and plenty of people were leaving. However, as you can see from the final photo above, the audience for Blur was huge. We got a spot dead centre, ahead of a gang waving Somerset flags, just before the set started. Hit after hit and classic album tracks followed. Loads of ‘Parklife’, including Phil Daniels guesting on the title track. And ‘Tender’, which I hadn’t heard them do live before, was the song of the night. It was a big, happy, Glastonbury singalong, wave your arms in the air experience, and we all loved it. During the big ballad, ‘To The End’, I felt an arm slip round my waist and turned to find a long haired blonde of 19 or so, in a blue dress decorated with stars. She began to serenade me like a long lost lover: ‘and it looks like we could have made it’. I serenaded her back and we sang another chorus together, then she slipped back into the crowd. A Glastonbury moment.