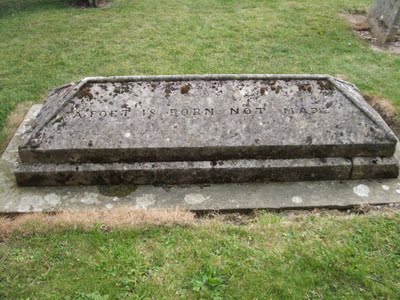 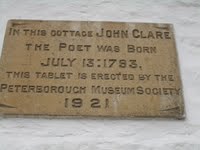 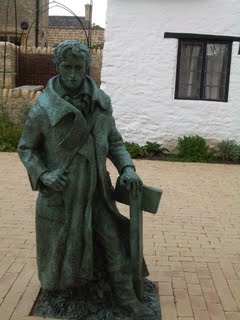 I discovered the poet John Clare in 1979, when the singer Kevin Coyne adapted his best-known poem ‘I Am’ on the wonderful ‘Dynamite Daze’ album. I bought his collected poems and read up on him. Easy to see why former mental nurse Coyne should be fascinated by a poet who spent the last 23 years of his life in Northampton’s lunatic asylum. Hard to understand why the Literature degree I was doing didn’t once mention Clare. But, for all the acclaim that he received in his day, as a labouring class or peasant poet, Clare’s modern popularity is relatively recent. The John Clare Society was only formed in 1981. Nottingham Trent University, where I teach part time, has two John Clare Lecture Theatres, but they were only built this century.

This year, the cottage where Clare lived for his formative years has been renovated, expanded and opened to the public. We planned to go earlier in the summer, but the weekend opening has been sporadic. It’s now open from 10.30-3.30 7 days a week, and it’s right next to a pub, The Bluebell Inn, where Clare worked as a young man. Well worth the hour’s drive, we figured.

The women on duty in the smart reception area seemed surprised to see us and even more surprised that we didn’t want to take the audio tour (if I wanted to cut myself off from the experience, I’d stay home and watch one of the videos on Youtube). Usefully, they warned me about the low ceilings, which led me to put on a baseball cap in case of mishap. The first room we went into (not there when Clare was growing up) had Clare’s death mask and a moving note that he wrote to somebody whose name he couldn’t remember, explaining that he was in a madhouse. We saw the small rooms where Clare lived as a child, and the bedroom that he later shared with his wife and children. Not so easy to imagine the five tenements that the tiny cottage used to be, for it had long since been converted into a family home. Everything seemed too light and clean. It didn’t compare to visiting Wordsworth or Hardy’s cottage and while there were some nice tributes from other poets, the extracts from Clare were limited and repetitious. More manuscripts, please. ‘This is my favourite bit’ said Sue, as I came down the stairs back to the room with the death mask. Looking to see what she meant, I gave my head such a bang on the low beam that I fell over. Lucky I was wearing that baseball cap.

Outside, I picked a few windfall apples from the orchard that Clare’s poor family used to help support themselves and we pondered the effect of Enclosure on the landscape around us. Some of the lovely gardens are meant to be planted as they would have been in Clare’s time, but there’s no sign of that yet. We thought we were in time for lunch at the neighbouring pub, but they don’t do food on Mondays, so we charged over to the other pub, only to find that it was closed on Mondays. ‘I would have told you that’ said the curmudgeonly landlord as he served me a half of John Clare ale and a packet of crisps. Despite the place’s potential to boost his trade, he didn’t have a good word to say for the cottage trust, saving particular scorn for the restoration of a dovecote that was once used by the pub (but predates it by 300 years, I later discovered – it did seem like a particularly useless space, with an irritating video that came on when you went in). A local described how, when he arrived in 1955, Helpston had five pubs. Today, there are two and the village’s only shop has closed. There are no signs for the Clare cottage, which the pub (and, for all I know, the village), with its John Clare room and Poet’s snug, seems to want to fail. A peculiarly British attitude.

Our friend Jenny, who we met in Cuba and happened to live in the next village, rescued us with a lovely late lunch. On our way home, we visited John Clare’s grave (pictured at the top), which is also in the village, and this was the most moving part of the afternoon.