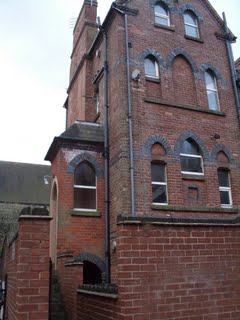 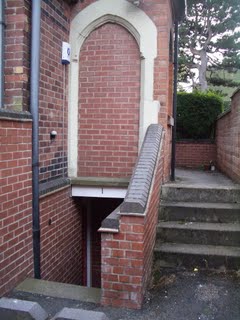 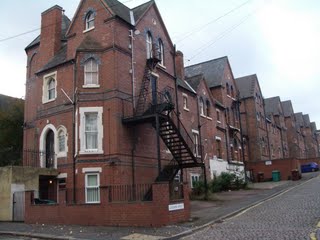 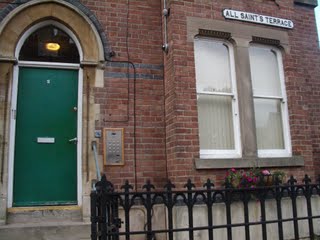 Yesterday I had to do some speedy reading in order to write a note for the programme to Nottingham Playhouse’s adaptation of Graham Greene’s ‘Our Man In Havana’. A few years ago Michael Eaton and I took David Lodge to what we thought was Greene’s old lodgings, Ivy House, at number 2, All Saints Terrace, near the Arboretum (bottom photo above). Here’s David’s account of the visit.

However, this theory had flaws, principally because 2, All Saints Terrace has no room for a basement flat, which doesn’t fit with Greene’s account of his landlady living in one. Googling yesterday morning, I discovered that two Nottingham Greene fans have come up with a more convincing theory, that the current All Saints Terrace wasn’t so named in the 1920’s and that what Greene referred to as All Saints Terrace was the back of All Saints Road. This road used not to have a name, but is now called Goodwin St (see the second photo above). The two lines of houses that back on to Goodwin St fit Greene’s description in his one Nottingham novel, ‘A Gun For Sale’, where he writes of “two rows of small neo-Gothic houses lined up as carefully as a company on parade”.

Before committing this theory to print, I thought I ought to negotiate the Goose Fair traffic and check it out for myself. The big, multi-occupied houses that back onto Goodwin St have the requisite basement room where the landlady might have lived (see the third photo above). Also, Greene would have needed to climb some stairs to get to his groundfloor bedsit, as his letters suggest, and that fits too (see the top photo). I’m convinced. I’ve signed up to join the Facebook group that wants a plaque to Greene put up at the top of Goodwin St (it would be nice to know the exact house, though. Maybe somebody has the energy to track down the deeds and find out which house on All Saints Street used to be called Ivy House).

I’ve included the new information in my piece for the Playhouse, which I’ll post on here when the play has opened, in a couple of weeks’ time. During the run of ‘Our Man In Havana’, the Playhouse will be selling copies of my novel about literary forgery, ‘The Pretender’, which features Greene heavily in the story and on the cover. Now all we need to do is track down the boarding house on Hamilton Road, Forest Fields, that Greene lived in for his first few days in the city. Any ideas?

One Reply to “Where did Graham Greene live in Nottingham?”