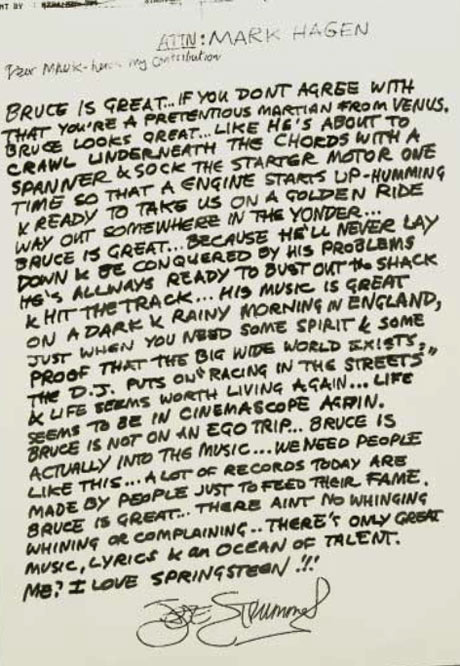 This blog has been going for ten years next week. It began in June 2000, with my extensive diary of that year’s Glastonbury festival, which also acted as my research notes for the Glastonbury novel Festival, which was published the following year. My Glastonbury diaries (there were subsequent ones last year and in 2003 – you can find them in the archives) have always been the most read pieces on the site. Sadly, for its first three years, the site was on Geocities, rather than my own domain, and their archives are no longer accessible. This week, I’m going to dig around amongst some old back-up discs and see if I can find those original posts and put them back up here. No Glastonbury diary this year, I’m afraid, as I’m not going. Instead, a download of the week to celebrate Glasto and the late Joe Strummer (who I saw three times, once on the ‘Give ‘Em Enough Rope’ tour and twice with the Mescaleros).

One of the highlights of Glastonbury last year was managing to get to the very front with my sister and younger brother just in time for Springsteen. Bruce came on and began with this song, which I suspect only a fraction of the crowd recognised. He sang it on his own, then said ‘For Joe’ and brought on the E Street Band for his huge, crowd pleasing set. It was a fantastic moment and this is a fantastic song, set at a festival which is probably Glastonbury. I wanted to name one of my reluctant reader novels after it, but the publishers went with the shorter ‘Coma‘. The illustration is of a bracing, pro-Bruce rant that Joe wrote for a music magazine. Joe’s enthusiasm for Glasto was one of the reasons that the boss was persuaded to play his first UK festival.