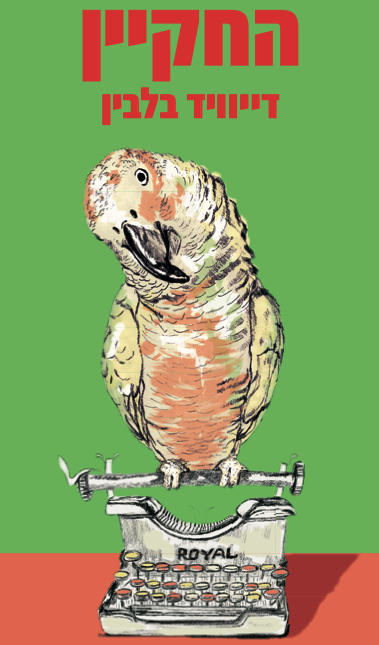 Above is the cover of the Achuzat edition of my novel about literary forgery The Pretender, copies of which arrived this morning. What’s that parrot about? Think about it for a minute – the narrator’s first significant literary forgery is accomplished on a 1920’s Royal typewriter. My first novel in Hebrew!

After Tuesday’s lousy effort at photographing Broken Social Scene (see below) I didn’t take my camera to Jackson Browne and David Lindley on Thursday. I was reviewing the penultimate show on their European tour for the Nottingham Evening Post. I’d seen the second show on the tour, and it was OK, but shambolic in places. The gig never really took off, and Browne refused to play the song that I named the novel after (sort of – its original title was Forgery:A Memoir or, 20 years before, The Storyforger, neither of which quite hit the mark). Would he play it in Nottingham? See below. And, after the review there’s a download of a song he didn’t play in either place (although several people called out for it in Nottingham), but which was a highlight of the last Lindley/Browne tour, which I also saw in Sheffield, as it can be found on the new double live CD Love Is Strange.

It’s been 20 years since David Lindley played the Concert Hall (with Ry Cooder) and five since Jackson Browne made his only previous Nottingham appearance, solo. Tonight, they made up for that absence, and how. The regular tour setlist was torn apart as the duo were joined by Tino di Geraldo on tabla for a 45 minute acoustic set that included For Taking The Trouble, Looking East and the classic For Everyman, as  performed on the recent live double album that Geraldo guests on, Love Is Strange.

The beginning of the main set suffered by comparison, with soft rock tracks from Browne’s latest album, but soon soared with In The Shape Of A Heart followed by the return of Lindley for Your Bright Baby Blues and the remainder of the night. Lindley’s Mercury Blues and Doctor My Eyes were particular highlights. Browne’s fine, long time band have a huge repertoire and they found time to fit in three audience requests: off the wall ones rather than the obvious crowd pleasers. We got a lovely version of Warren Zevon’s Carmelita, an exquisite The Late Show and, for the final encore, in response to a sign hung from the balcony, the reggaefied Everywhere I Go.

Browne and Lindley bring out the best in each other. Lindley is a genial, retired professor to Browne’s eternal student, singing about the search for true love and the meaning of life as earnestly at 61 as he did at 21. The two and a half hour performance climaxed with a tremendous arrangement of The Pretender that brought a standing ovation. The crowd stayed on their feet and rocked out to Running On Empty. Last time Browne was here, an acoustic version had to suffice. This time, we got the full works. A terrific show.

Jackson Browne and David Lindley – Call It A Loan [Live]

3 Replies to “Reviewing The Pretender”