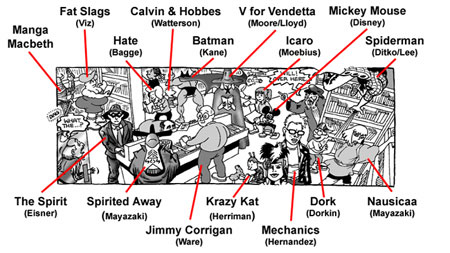 A couple of years ago, the cartoonist Brick and I came up with a two page comic strip for the magazine Tripod. It’s about the nature of comics and graphic novels and has since been reprinted elsewhere in part and full. I’ve used it in my own university teaching. Now we’ve decided to make it available for free. You can find it on the downloads page of this site (or read online here). As an added bonus, above is a key to one of the panels that Brick did for English Drama Media magazine, while below is part of an introduction that I wrote for that reprint. Enjoy.

There’s an old saw saying that ‘if Shakespeare was alive today, he’d be writing soap operas’. What if we disputed that and said he’d be writing graphic novels instead? I came up with a complicated science fiction concept about time travel being possible, but extremely expensive: people couldn’t travel to the past but corporations could bring individuals back. We tried to condense this into a short strap line beneath the title. Brick put in HG Wells’ time machine to make the point instead. But that didn’t work. We replaced it with a TARDIS.

The script for the story you’re about to read was written over two weeks that included three lengthy meetings and numerous emails. Making DaVinci the artist was the second key decision (Brick has long been obsessed with Leonardo and came up with the artist being brought back to design weapon systems rather than paint). We spent a long time looking at structure. We wanted an imaginative leap between the two pages, with Will and Leo climbing a ladder from bottom frame to top frame. When I saw the first rough, I realised we didn’t need it. The extra space made the story breathe more.

My favourite panel is the third one on page one, where Brick fits in characters covering the entirety of comics history. We also had to decide the unique elements of comics we had to convey, then get them all into one panel on page two. Much of the rest of our work consisted of cutting words to make them fit but still make sense, then finding little visual gags to better convey the ideas.

Not all artists and writers collaborate this way. I’ve seen one of Alan Moore’s scripts and he nails every possible aspect of what should go into the drawing. I’ve worked like this with other artists but the way I work with Brick is more fun and more successful.

The original artwork for this comic now stands proudly framed on the wall of my university office. All that’s missing are the computer generated sections like frame two, page two: a history of the graphic image which shows Brick’s incredible attention to detail.