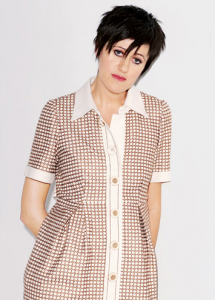 I first came across Tracey Thorn when I heard  a beautiful, very articulate love song called ‘Plain Sailing’ on a sampler cd in the early 80’s. I put it on the first mix tape I made for my partner.  Tracey met her partner, Ben Watt, at university and they formed Everything But The Girl. Nearly thirty years on, they’re still together, but a lot of their friends aren’t. Her second solo album, ‘Love And Its Opposite’ came out recently and is a kind of concept album about divorce.  It’s a brilliant record, full of thought provoking, intelligent songs that are also growers. Here’s the one that keeps getting stuck in my head. Initial copies of the album came with a Berlin Demos bonus disc and this version is from that. I urge you to check out the finished version and the full album.

2 Replies to “Breaking Up Is Hard To Do”