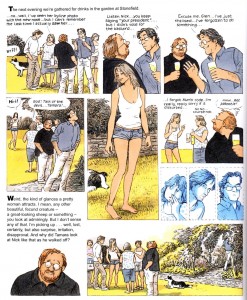 It’s more than 18 years since I last saw Lloyd Cole, whose new album ‘Broken Record’ is just out. Back then, he was filling Sheffield City Hall. Next month, he plays ‘Glee’ a compact new Nottingham venue, with his Small Ensemble. The album’s very enjoyable. The song below can’t help but make me think of the recent movie Tamara Drewe, adapted from the Posy Simmonds graphic novel of the same name, which is set at a wickedly observed writers’ retreat. The crude trailer for the movie made it look so bad that I avoided its Nottingham premiere, with director and Posy in attendance (although I did go and hear Posy speak earlier in the day). Then the word of mouth was so good that I went along on opening night, and it was really sharp and entertaining. The adaptation actually managed to improve the plot in a couple of crucial ways, a rare thing indeed.

The other thing that Lloyd’s song made me think of was Rod Stewart’s ‘You Wear It Well’, which it references in the first line (download both and you’ll see what I mean). Rod and the Faces was one of the first gigs I went to, back in Christmas ’73, when this song was only a year old. I saw him again a mere 36 years later and this was one of only three songs that appeared in both shows (the others were ‘Maggie May’ and “Stay With Me’). Rod’s not very fashionable these days. It’s more than thirty years since he made a good album, but he still puts on a great gig. If you ever wondered what the fuss was about, listen to ‘You Wear It Well’, loud.

Rod Stewart – You Wear It Well