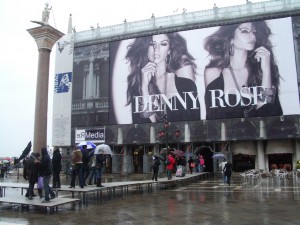 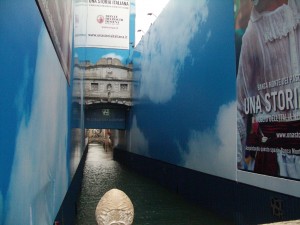 This week’s song is a couple of days late, as I was in Venice on Sunday. I did work out what song to put up while I was walking across the duck boards in a flooded St Mark’s square. I was trying to remember whether Warren Zevon’s ‘Ain’t That Pretty At All’ mentions Venice. Perhaps it was something to do with the advertising hoardings that currently surround the Bridge of Sighs and dominate the approach to St Mark’s Square, both pictured above. Anyway, I was annoyed to find that the song wasn’t on my iPod. But now it is, and I won’t spoil the song for you by revealing the answer. Venice remained magical, despite the hoardings, despite the rain.

I devoured Dyer’s Jeff in Venice while I was there. Interesting to read about the place in summer. I’ve only visited between November and January. Rumour has it that it’s quite busy at other times of the year. And smelly. Don’t fancy that. The best thing we saw this time wasn’t a church or a Tintoretto, but the Chapman brother’s nine display cases entitled ‘Fucking Hell’ at the new Punta Della Dogana. I’ve never been much taken by their stuff before, but this was haunting, like an intricate, haunted movie sets designed by Brueghel the elder after  he’d visited the Vietnam war and Nazi concentration camps. Scroll down here for an image which gives you a tiny sense of it. Savage. I suspect Warren Zevon would have liked it too.

Warren Zevon – Ain’t That Pretty At All

One Reply to “Ain’t That Pretty At All”