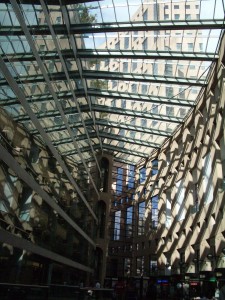 It’s stating the obvious, for a writer, but I love libraries. My partner and I are the sort of people who visit libraries on holiday, as the photo above, of Vancouver’s fantastic public library last August, illustrates. The other day, after reading an article in the New Yorker, I was trying to work out an excuse to get into the Vatican library, which is about to reopen. There weren’t many books in our house when I was growing up, yet all of the world’s literature was available to me in West Kirby library, then Colne library and Burnley library. When I was on the dole, trying to become a novelist, I spent an awful lot of time in Nottingham City library and Radford library. These days I belong to three different libraries (all of the Nottingham City ones, Nottingham Trent University’s libraries and Bromley House) and use them all frequently.

If libraries didn’t exist, you’d have to invent them. Councils have a legal duty to maintain public libraries, yet, given the massive cuts in their budgets, local authorities are closing libraries all over the country, cutting opening hours, reducing books budgets. This despite the UK, home of the English language, rates only 25th in world literacy tables. The cuts in libraries are part of the Conservative led government’s drive to restore inequalities of opportunity in this country, to keep the poor in their place, where they’re ignorant enough to subsidise the bail-out of bankers (socialism of a sort, at last, but only for the rich, now that’s a rich irony) and accept part time work on minimum wage while the toffs keep on taking, taking, taking…

Got a bit carried away there. The point I wanted to make was how great it was yesterday, national Save Our Libraries day, to turn up at Beeston library, where I’ve heard many great poetry readings, to find a huge crowd of people borrowing books and listening to local authors reading. I did half of my short story about a book thief in a public library Withdrawn From Circulation to the biggest, nicest crowd I’ve had in years. By 12.45pm, when I left, 787 customers had clicked in to the library, which would normally by then have had 300-400, which means about 400-500 took part in the mass borrow-in or attended the read out. Similar events happened all over the country, a mass love-in for libraries. Will it make any difference? We’ll see. Notts County Council have already, at least, reduced the severity of the cuts to local library services after vigorous protests. Your library. Use it, or lose it. Protest and borrow. Here’s a nice song.

2 Replies to “Protest And Borrow”