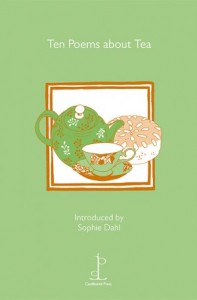 My friend Jenny Swann has been producing these terrific pamphlets called ‘Instead Of A Card’ for two years now, and doing very well, with the support of writers like Carol Ann Duffy. The latest is Ten Poems About Tea. It’s a beautifully produced pamphlet that includes Duffy, Eavan Bolan, John Betjeman and others. I bought two copies, one of which is about to make its way to New Zealand. Given my proclivity to bang on about the perfect cup of tea (got to be made with leaves, brewed for five minutes, in a pre-warmed pot), this is an appropriate time to plug the whole series. Oh, and here’s a song of the week by Gilbert O’Sullivan, who’s touring soon. If you ask me, it’s the best thing he’s done since ‘Nothing Rhymed’ and ‘Alone Again, Naturally’, but maybe I’m just a sucker for the subject matter.

Gilbert O’Sullivan – Where Would We Be (Without Tea)