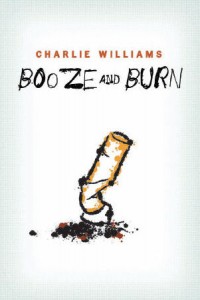 This month sees the re-publication of my second Royston Blake novel, Fags and Lager, under the new title of BOOZE AND BURN. I guess I will always think of it as Fags and Lager, but I don’t mind the new name. Especially since the word “fag” is now filtered out of work email and search engines all over the world, meaning I would miss out on a few mentions. Mind you, **** and Lager looks OK, doesn’t it?

The first book in the series was called Deadfolk, and in that I wanted to depict a slightly delusional bouncer in his backwater stamping ground of Mangel… and no more than that. But when I started writing a sequel I knew that things had to change, just like my home town of Worcester (the model for Mangel) had changed irrevocably over the years. One of the things that stuck with me most was that time in the late 80s when drugs seemed to take over. Call it acid house or whatever you like, the upshot was that young people who otherwise would have spent £20 on lager and a kebab were now splashing out on a couple of tabs.

Now, it’s arguable which one of those Saturday night pursuits is worse for you, or more dangerous or morally wrong or whatever, but the thing I noticed at this point was the generational chasm it opened up. Dads and mums of teenagers could understand and even condone getting wrecked on beer, but… drugs? Drugs are for junkies, right? And the people who sell them are evil scum who murder children outside schools. And look at Zammo from Grange Hill – that’s what happens to you if you even look at a drug. JUST SAY NO. Etc etc.

(All of this, coming from a generation that supposedly *lived* through the 60s.)

Back in my fictional town of Mangel, I wanted to show some of that. Not getting involved in the nitty gritty detail of the drug world (nor even reality in general), but showing some of the confusion and anger of a small town’s populace when their youth gets a drug craze. And I wanted to show the other side of the coin, the legal and morally correct side that smokes twenty a day and pisses away their wage cheque at the bar. Enter Royston Blake, patron saint of that world. As doorman at Hoppers (“Mangel’s premier piss house”) he is best placed to observe this cultural shift amongst the young, but probably the worst equipped to analyse it.

Halfway through writing the book I moved from London, where I had been living for eight years, back to Worcester, which I had escaped (for good, I thought at the time), aged eighteen. I hadn’t really spent much time there in the intervening years, and it was a bit of a jolt to see just how much things had moved on. They always do, even in a place like Worcester that seems static and behind the times when you’re a kid growing up there. Then I bumped into one or two older guys I used to know, proper fags and lager geezers who would sooner give up a major organ than change their world view to accommodate cultural shifts (and sometimes do). Towns change. People even change, if you give them enough time and the right conditions. But I’m not sure individuals do.

If all that sounds a bit worthy, I must have painted a lopsided picture – Booze and Burn was shortlisted for a “Lefty” award for funniest crime novel of the year. Saying that, it didn’t win. As a sort of consolation prize, Tangled Web called it “300-odd pages of squalor, f-, s- and c- words, extreme violence and drugs, the odd hint of perversity, monstrous sly humour and all with no redeeming social message whatsoever”.

Gimme that over a poxy award ANY day.