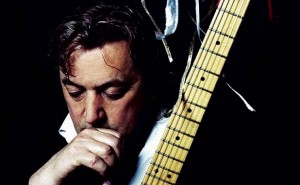 Jackie Leven died on Monday night. I wrote at length about Jackie last year, on his sixtieth birthday, and the song link there is still live. I met him several times over the years. It was hard to reconcile the affable bloke with the fantastic humour and amazing songs with the intense guy I first saw perform. That was with Doll by Doll at Nottingham’s Garage in 1979. Man, he was scary. ‘One of the few good shows we played’, he told me twenty years later. DBD were a great post-punk group with a handful of really strong numbers (including ballads like Janis & Strip Show that pointed the way to some of the later solo work) but they weren’t his first venture. I have a cd by John St Field which is Jackie in the early 70’s, channeling his inner CSN and Van Morrison. After DBD, he came back from a near fatal mugging and heroin addiction to become an incredibly prolific songwriter – the voice with diminished range but still superb – and hilarious raconteur – he made me laugh more than any stand-up comic currently on the circuit. And what songs. At their best, they were profound, poetic, haunting and – always – honest.

I had a ticket to see him in Derby last month. Now I know why the gig was postponed. Several friends and I were looking forward to it immensely. You were guaranteed an intense, entertaining two sets. Jackie never played encores (he might just do a request, if he was feeling generous, but only the one, mind). He would, however, give fans a hug or a kiss or an autograph after the show, and I usually had a little chat with him. Last time round I wished him well for his upcoming 60th birthday, a landmark that he shrugged off with his usual laconic humour. There have been many good obituaries, including this one from The Guardian, one from his native Scotland and this tribute from an uber-fan. Many note that Jackie was only a cult artist in the UK and should have been much more. True, but he never complained about his lot, and if his (ever renewing) fan base was a cult, I’m proud to have been part of it. Condolences to his son, Simon, and partner, Deborah.

Jackie Leven – To Live and Die in Levenland