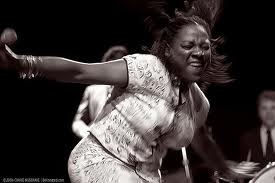 In the UK, the Dap-Kings are best known for backing Amy Winehouse on ‘Back To Black’, but their regular gig is with veteran soul singer Sharon Jones.  An eight piece band, with two backing singers, the Dapettes, they played fifteen minutes of warm-up, including a terrific rendition of Howard Tate’s classic, Stop. Then Sharon Jones stormed on stage to sing He Said I Can. In a set dominated by tracks from recent live album ‘Soul Time’, Jones showed that, when it comes to funk, she’s the best in the business. What If We All Stopped Paying Taxes and When I Come Home were highlights, with audience members pulled on stage to dance along in this classic soul revue.

Introducing Longer, Stronger, Jones told us about the struggle she’d had to make it, describing her music business rejection, aged 25. ‘They said I was too black. Too fat. Too short. Too Old.’  Jones turns 56 in May and is clearly at her peak. She wasn’t going to let the death of her mother, a few days ago, make her cancel this long-awaited tour, but spoke movingly about her. In a lengthy, riveting tribute to Amy Winehouse, Etta James, Whitney Houston and her mother, she performed fantastic snippets of those singers’ hits in the original style, made us laugh a lot, then brought some of the ecstatic crowd to tears. This was a master class in soul music by a frenetic, magnetic performer. Absolutely outstanding.