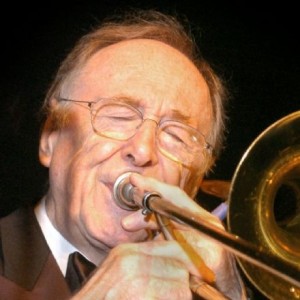 This is an extended version of the review that appeared in yesterday’s Nottingham Post, (the headline for the edited version wouldn’t have been my choice!) with added personal reflections.

Over at the Playhouse, they’re reviving ‘Forever Young’, about a home for retired panto players. Each of tonight’s frontmen is in their early 80’s, yet none is ready to hang up his wind instrument yet. They can’t need the money, but is it love, or habit? A very full house came to find out.

I’ve never reviewed a jazz show before, since I know my limitations and, while I go to several jazz gigs every year, I don’t have the breadth of musical knowledge to write well about them, so would rather fork out a few quid to enjoy myself. But the earliest shows I went to – alongside Pink Floyd, Jethro Tull and Emerson, Lake and Palmer – were trad jazz at the Black Horse pub in West Kirby, where my dad would sneak me a half of mild. I’ve always retained some affection for trad, helped no doubt by friendship with John Lucas (see below) who plays clarinet in a trad band, and love of the recent New Orleans drama Treme. So, I persuaded my dad to come over for this gig, and help me bluff my way through the review. Not that, as it turned out, a great deal of bluffing was needed.

The hirsute Chris Barber, always the most credibile of trad jazzers, opened. Dad and I had a brief chat with him before the show, which was a privilege. At 81, Chris has no intention of retiring. However his partnership with trumpeter Pat Halcox, the longest in the history of jazz, ended with Pat’s retirement four years ago. Incredibly, this September marks his band’s sixtieth anniversary. Chris, hirsute in a tux, was always the most credibile of trad jazzers. The man behind the British Blues Boom (he paid for many then forgotten blues legends to come over in the late 50’s and 60’s) opened the show. He also got the longest set, over an hour, and justly so. Chris gave us his big band and the smaller six-piece version that much of the audience was more familiar with from the fifties.  They played plenty of Ellington and several standards, including ‘Going Home’ by his original trumpeter Ken Colyer, climaxing with Bechet’s ‘Petite Fleur’ and the inevitable, but very well choreographed ‘When The Saints’.

When rock bands do the revival circuit, they use the same core musicians, but each of tonight’s legends had their own full band, far too many musicians for me to name. Barber’s included his first female musician (as against singer), Amy Roberts, on sax, flute and clarinet. Barber himself still plays good trombone, a physical feat that should be beyond an 81 year old.

Acker Bilk, the oldest performer, still has the fat, lugubrious clarinet tone that is his hallmark, but is in less good shape. ‘I’ll give it a try’, he said of his signature tune, ‘Stranger On The Shore’. Most of his jokes were of an even older vintage. To be honest, I dozed off.

Kenny Ball and his Jazzmen closed the show with as much energy as the lateness of the hour allowed. Chest problems means that Kenny lays off most of the lead trumpet work these days, but his band mixed trad with several of his pop hits. I could have done without the classical interlude and drum solo, but Ball’s cheeky persona kept most of the audience in their seats for the fifty-five minute set (and doubtless many of those who left did so because they were going for the bus). Kenny always used to irritate me when I was a kid and he was all over the TV. In middle age, I found him less irritating, but no more interesting. He got the audience – average age well into their 70’s – on their feet for a closing singalong of ‘Hello Dolly’, which was, at least, mercifully brief.

The show closed a couple of minutes short of eleven. The length of a Springsteen show or a short Grateful Dead gig then, and, if I hadn’t been reviewing it, I’d have happily left after Chris Barber. But my father and I stayed up until gone one talking about jazz, and listening to the excellent Larkin’s Jazz compilation, so it was far from wasted time. I doubt I’ll ever see three performers of such vintage on stage again. That said, I do hope to keep seeing the 85 year old Stan Tracey, who I’ve seen frequently for 35 years, for a good while yet.