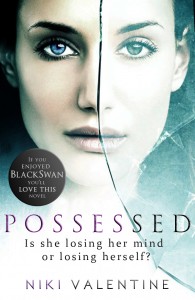 In the week of the Harrogate Crime Writing Festival (see post below) and the Booker prize long list (on which I’m delighted to find this debut, indie novel by a fellow member of Nottingham Writers Studio), it’s more than appropriate to host this particular guest post by Nicola Monaghan, aka Niki Valentine. Like last year’s guest poster, Lawrence Block, Niki wrote one of the Crime Express novellas, the very fine The Okanawa Dragon. I’ll be taking a proof of Possessed on holiday with me. It’s already available as an e-book and will be published in paper on October 25th.

I am frequently asked what the difference is between my Niki Valentine books and those I write as Nicola Monaghan. I am tempted to say the Valentine ones pay more of the bills but that answer, although true, is a little glib. I do have a standard response to the question, honed over time. Valentine books are thrillers with supernatural elements, whereas Monaghan ones are also thrillers, but more literary. But what does that mean? I think there’s often an assumption that literary is a synonym for quality when used in relation to books. But I’m not convinced.

I’ve thought long and hard about these questions and examined my own process, and the books I’ve produced. There’s no doubt that I can take more risks with the use of language in the literary books. These have tended to have a first person voice, often in dialect, and unreliable narrators. Both of my genre books are third person narratives. That said, the third person in these books was so firmly from a specific character’s perspective that it’s easy to forget that remove; this has been commented on by reviewers. A French critic even said it was written in first person, and I had to check the translation to see if they had changed it in this way. (They hadn’t.) Just to complicate things even further, my first novel, a prize winning book in the literary world, was also stocked on the crime shelves of bookshops. I was invited to the Harrogate crime writing festival to talk about it and later, to write a Crime Express novella.

It’s really interesting when I examine the techniques and themes in all my books and realise just how similar they are. All of my point of view characters are unreliable in their accounts. The supernatural books rely on this, as I wanted to play with grey areas and alternative explanations, so that my horror is pretty realist compared to the genre as a whole. All of my books explore dysfunctional relationships and friendships, fractured psychologies, damaged people. They are so thematically similar you might imagine that I planned it that way, and yet I wasn’t even aware I was doing it.

People ask me if one type of novel is harder to write than the other. I find each challenging in its own way. There are differences. My story line must be tight and tense all the way with the psychological horror and I must tie up the main storyline, without leaving too many questions open. With the literary fiction, I’m allowed more leeway, perhaps, to meander or discuss, and I can reflect real life a little better by leaving some aspects unresolved. If I was asked which was the more rigorous art, the harder to write, my honest answer is that it’s the genre fiction. Do I think my prize winning novel is better than the psychological horror I’ve written? Perhaps better than my first attempt, but I believe Possessed stands up to anything else I’ve ever produced.

Is there really such a thing as literary fiction, separate to genre fiction, different, with a stamp of quality as a result? Personally, I don’t believe so. The recent recognition and redefinition of authors previously considered ‘pulp’, such as Philip K Dick and Stephen King, is unsurprising to me. After all, if we look at the books in the ‘canon’ that are considered great literature there are many, many examples of what would be published now as genre novels. Du Maurier, the Brontës, Dickens, Shelley, Orwell, Wells and Poe. I believe that it is story that persists, when time has its way.

Often, the concept of genre is dismissed as a marketing construct but, although genre is used by marketers, I don’t believe it’s as simple as that. It’s human nature to try to categorise and order things. It’s always a simplification and it has to be but we need to find these common points of understanding if we ever want to discuss anything. And literary fiction? That’s just another genre, an area of agreement and definition, and enables us to talk. Some of it is mind-blowingly good. A lot of it is not. It comes with no guarantee.