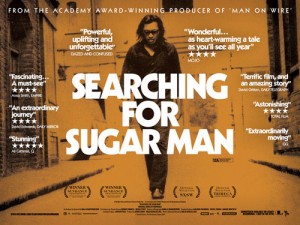 Yesterday, I finished reading  Gorm Henrik Rasmussen’s excellent book about Nick Drake ‘Pink Moon: A Story About Nick Drake‘ and went to see a wonderful new documentary, ‘Searching For Sugar Man‘. Impossible not to draw links between the two. Unfortunately, I’d read a piece about the documentary that gave away a major surprise. The less you know about the singer Rodriguez before seeing the movie, the better. No big spoilers here. The film tells the story of a singer-songwriter from Detroit who made two great but ignored albums in 1970 and 1971, then vanished. He was rumoured to have killed himself onstage as a protest against audiences who talked through his music. Drake made three albums in his lifetime and walked off stage during his final gig because people were talking.

Rasmussen’s book, while not aiming to be as comprehensive as Trevor Dann’s, which I’ve already written about extensively (in a post that also details my own near forty years as a Nick Drake fan), is an original, valuable work. First written in Danish, it has been updated and translated this year, and it acts as a valuable corrective to various Drake myths. The young poet got to know the Drake family well, while Nick’s parents were still alive, and puts the kibosh on three theories about Nick’s last, very depressed years. Firstly, far from being asexual as many have suggested, Nick had plenty of lovers before severe depression curtailed his love life. While he smoked a lot of dope and might have tried heroin, possibly at the behest of John Martyn, he was never a frequent user. Thirdly, it is very unlikely that he deliberately killed himself (there’s no reference to the attempt to hang himself that I found the most dubious, unsourced story in Dann’s fine book). According to a close friend of his, who later became a psychiatrist and saw a lot of Nick right up to his death, he suffered from an existential depression that did not respond to medication. The commercial failure of his music was a contributing factor to this. One of the weirdest new stories in ‘Pink Moon’ is that, not long before his death, Nick bought an electric guitar which he used to play loud at Far Leys, and planned to reinvent himself as a rock musician.

‘Searching For Sugar Man’ shows how the music of a mysterious folk musician who vanished from public view is brought back to life in South Africa, a country cut off from the rest of the world, , where (I’m only giving away the first five minutes here) Rodriguez becomes bigger than Elvis and his debut album is as popular as ‘Abbey Road’ and ‘Bridge Over Troubled Water’. This is long before the internet and the royalties don’t seem to have hurried to his family, for, back home in Detroit, he’s a forgotten figure. Strange to think something similar could have happened to Nick Drake, with ‘Five Leaves Left’ or ‘Bryter Later’, classics that could have been huge albums, had they been widely heard. His death fed a romanticism about him that may have accelerated his myth. Early song ‘Fruit Tree’ anticipates his eventual fame, for songwriting that good was always going to find acclaim at some point. ‘Pink Moon’ is one of the most intense, introspective, beautiful albums in ‘folk’ music, a 28 minute gem.

Would that car advert or a documentary have found him a new audience at some point? It took thirty years after his car accident for Nic Jones to be rediscovered and tentatively return to the stage. Similarly, at some point, Nick would have been sought out, perhaps persuaded to record or even perform again. But ‘what if’s are for children. If you’re a fan of Nick Drake, you should definitely check out Rasmussen’s book, and I urge everyone to see ‘Searching For Sugar Man’. It acts as a great introduction to the music of Rodriguez, which – like most people – I’d never come across before. I can hear Stevie Wonder, Dylan and Cat Stevens in there, with plenty of politics, but he’s undoubtedly an original. His real story is, inevitably, rather more complicated than can be fitted into an 85 minute movie, but I’ll say no more. Go see it.