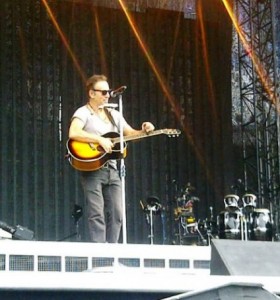 I missed this year’s Bruce Springsteen tour, partly because I’m not very keen on massive stadium gigs, though I did get down the front for Bruce at Glastonbury. Wasn’t too bothered, as I’ve seen him ten times before, but I wish I’d been to the show his band played at Helsinki on the last day of last month. The legend always had it that Bruce played four hour sets, but they usually came in nearer three. At Helsinki, however, he played for four hours and five minutes. AND he played an unannounced 25 minute acoustic set for early arrivals. Recordings, needless to say, circulate. This seems the most appropriate track to feature, from the encores that night, a cover of Southside Johnny & The Asbury Jukes’ ‘I Don’t Want To Go Home’, which was written by Miami Steve, who sings with Bruce on this version (which went into a cover of Jackie Wilson’s ‘Higher and Higher’). Enjoy.