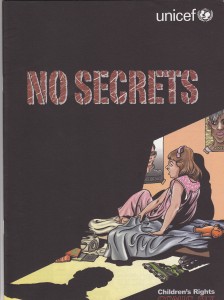 Everybody’s disgusted, but nobody’s that surprised about Jimmy Savile. He was always creepy, and the girls he had his arm round as he presented Top Of The Pops rarely looked comfortable. What had he already done to them? Nevertheless, the scale of his evildoing beggars belief. The comedian Jerry Sadowitz nailed him in a routine as far back as 1988. When I wrote a story for the UNICEF comic No Secrets (edited by John Clark) and called it Jim’ll Fix It, there may have been a subconscious dig at Saville, who I didn’t like. But that’s all. I’m not claiming any presience. The four page comic story, illustrated by John McCrea, is about sexual abuse within the family, which is still where abuse is most prevalent. It was written for use in schools, where more than a million of these comics were distributed. The series was a victim of its own success, becoming too expensive to continue after this final issue, but I’m proud to have written stories in three of its six issues and have now made the story permanently available to be read online or downloaded for free in the downloads section linked above.