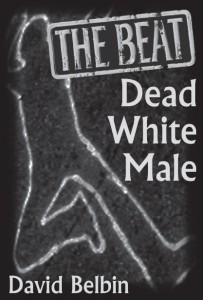 Hot on the heels of ‘Student’ (scroll down the page) I have a new eBook available. It’s exclusive on Kindle until the new year, but other formats will follow.  Dead White Male is a stand alone novel that was written as part of The Beat, a police procedural series about young police officers in Nottingham that ran from 1994 to 2000. It’s the series in which I learnt to write mystery novels (as against the one-off whodunits that were aimed at a young audience). I chose this novel to digitise because I think it’s one of my very best mysteries and serves as an introduction to the series as a whole. If all goes well, I intend to digitise the other eleven books over the next year. For added value, there’s an afterword in which I talk about the background to, and writing of, the novel. It’s also cheap – a mere £1.53 in the UK. All reviews appreciated (and if you’re a book blogger or reviewer and want a free copy, just get in touch via the contact button above).
What’s it about? When 19-year-old Scott Travis is found battered to death, Nottingham police are baffled. Probationary police officer Clare Coppola delves deeper into Scott’s past and a murky history emerges. Scott was a blackmailer. His victims included a medical student, a former prostitute and even a police officer. Which of them was desperate enough to kill to keep their secret hidden? Could it be somebody very close to home? I should emphasise that, while this was a best seller for an older Young Adult audience ie teens of 14+, it’s an adult novel in everything but length, with mature themes. And it’s not short – the Beat novels are the same length as the early 87th Precinct novels of the master, Ed McBain, around 50,000 words. However, the 90’s was long before the more recent ‘crossover’ phenomenon. I’m hoping that, in the noughteens, The Beat will find a new audience in readers who’ve enjoyed my Bone & Cane novels. Do let me know what you think.