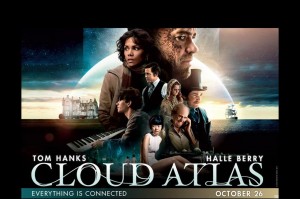 I was in two minds about whether to go and see the new movie of David Mitchell’s Cloud Atlas, probably the novel that’s excited me most in the last decade. Recently, I made it the one set book on NTU’s second year Art of Writing course, and I’d promised to organise a trip for the students. But then the movie was put back until after the course had finished. Their portfolios, returned on Friday, demonstrated that the novel (a Russian doll structure in eleven parts – six stories that are each interrupted by another, perhaps linked, story, then resumed on the other side: what do you mean you haven’t read it?) had gone down well, inspired the students to be ambitious and explore multiple genres. Job done.

The movie of Cloud Atlas didn’t pick up any Oscar nominations (I loved Argo but best film? In the same year as Amour? Come on!) & some of the reviews have been stinkers. Three directors. Six genres. Tom Hanks. I was prepared to hate it. But, actually, I found it unmissable. A folly? Hardly. Difficult? Definitely. It helped if you’d read the book recently, and, unlike my students, I hadn’t. I did reread a couple of sections to remind me of how it worked, but not the whole thing. And, anyway, there were changes: plot simplifications, mostly. In some cases, improvements (I seem to recall David Mitchell writing in The New Yorker about how the scripting process forced him to clarify certain things – must check out his introduction to the new paperback version). But the main one is that, instead of the Russian doll structure, the movie shoots about all over the place – a bit of a story here, a longer section there & WTF has that got to do with what? For the first hour, it’s confusing, at times irritating. Things judder around too quickly. Some people complain of being distracted by playing ‘spot the actor’ beneath the prosthesis, but I’d avoided reviews, so wasn’t aware that that was Hugh Grant or Hugo Weaving (who I watched in a second movie yesterday, giving a great performance in the Nottingham-set, Oranges and Sunshine). It shouldn’t matter.

But you know what, you get used to the way the movie works, and settle into it. Let some things drift past & let them sink in when you’re ready. Nobody in the packed (nearly all under 25) audience left. I was sat in the back row, best to enjoy the full cinemascope effect and even where I found it hard to follow the story (the future set stuff, which is the least effective part of the novel, as I recall), the visuals were stunning. It was a brave, ambitious, exhilarating, if occasionally exhausting movie. OK, it had a bit too much Tom Hanks in it (you always recognise him) and in one or two places the ‘if this were a book’ or ‘they should make a movie of this’ bits were rather clunky. However, I think I’m going to have to reread the whole book before I teach it in the autumn, then watch the movie again, just so that I can work out how the adapters did it. In fact, I might have to go again while it’s on at the big screen. A fascinating movie. I  urge you to see it.

I should also mention that the music is very good, and integral to the movie. I believe the three pieces of music below, by Japanese composer Toshi Ichiyanagi, partially inspired the novel. And since I’m heading to that London in an hour’s time, to see a solo concert by Keith Jarrett (a thirty-three year ambition fulfilled, starting to get very excited), the solo piano pieces below, played by Yukie Nagai, seem particularly apt.