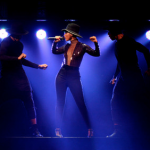 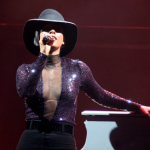 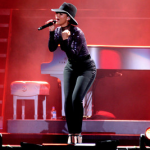 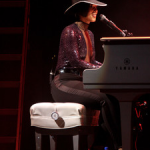 Five albums and fourteen Grammies into her career, Alicia Keys has the purest soul voice of her generation. She nearly fills the Capital FM Arena, where she last appeared twelve years ago, an evening that my companion witnessed. He describes it as a painful event: she only had one album out and every song was extended with singalongs and solos to make a 40 minute set last twice as long. These days, she’s a veteran, bolstered by her biggest hit to date, singing with Jay Z on Empire State of Mind After a bombastic intro, Keys appears behind a curtain to sing a snatch of that classic, but we know she’ll save the full version for last.

Five security guards sit impassively in front of the triangular stage, surveying the audience. They won’t be needed, as Alicia soon discards her black fedora and treats us to her impressive range, following the bump and grind of Karma with the smooth, catchy soul in You Don’t Know My Name. I’m making a note about its Delfonics-esque backing vocals when the song segues into a brief version of the Delfonics’ classic La La (means I love you) to the more poppy, anthemic title track of her latest album, Girl On Fire.

Purple lights herald a bunch of male dancers for the new Listen To Her Heart. I had mixed feelings about the dancers who accompanied her for half of the show, and couldn’t tell if the ballerina in Like You’ll Never See Me Again was there, or on video. Slowly the piano, her home, takes centre stage, but did we really need a guy acting as her lover while she sang Try Sleeping With A Broken Heart to him? There’s no point to her aping Beyonce or Madonna and, anyway, she also narrates between songs, using her strong Prince influence to good effect. Pity she doesn’t do her famous Prince B side cover, How Come U Don’t Call Me Up Any More? but you can’t have everything.

The dancers are dispensed with for much of the second half, which becomes more intense as a consequence. A series of piano ballads is unleashed with her gorgeous breakthrough hit, Falling, then a brilliant Brand New Me, followed by my highlight, the powerful ballad Not Even The King, which she describes as her and her infant son’s favourite song. I put it our best of year CD (tracklist now deleted, but the song’s available again below, for a brief time).

If I Ain’t Got You and No-One build the momentum to a climax, before she’s back for a terrific New Day and new album title track Girl On Fire, on which she plays drums all the way through. Seriously, it works. Throughout she has been dressed in a simple black outfit, but she changes into a purple ball gown for the final encore. In case you were in any doubt what it was going to be, a video of Jay Z plays over the white curtain. Then she brings the arena to its feet and tears up Empire State Of Mind, concluding nearly two hours of top notch soul. On fire indeed.

Photos above by Kevin Cooper for the Nottingham Post. This is an extended, slightly rewritten version of my review from today’s paper.

Alicia Keys – Not Even the King

The Delfonics – La, La Means I Love You