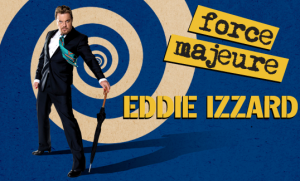 An extended version of my review as it appears in today’s Nottingham Post.

Thanks to TV and film roles, Eddie Izzard has become a household name. A documentary series about his ill-fated Mandela marathons begins tonight. He’s so popular that a second date was added at the Capital FM Arena. Confusingly, it’s the day before the first Force Majeure show.

Last time he performed in the city it was for 220 people at Lakeside. I tried to get tickets but missed out by a minute. Did get to see him at his next appearance, at this arena, when he was warming up for the then new Labour leader, Ed Miliband. Odd occasion. The other well known warm-up/microphone handerouter was Joan Bakewell. Eddie says he wants to be the next London Mayor or, failing that, a Labour MP. You could, therefore, be forgiven for thinking that his heart is no longer in stand-up.

He comes on to a flashy credit sequence, and talks in French for 15 seconds before switching to English so we won’t be confused. There’s a running theme about how he’s looking forward to performing his French shows in the French language (rather more, we are led to suspect, than he was looking forward to tonight’s show). There will be just one, four letter word, in English. Fuck, of course, though I couldn’t put this in The Post. He says fuck and fucking a lot and I don’t  have a problem with that, used to do the same thing myself, until I realised that it made me sound a bit… immature.

Eddie can be endearingly bonkers and surreal, but at first he sounds and looks tired. There’s some stuff about Charles I, the beginnings of democracy and the origins of the English Language that flatters our intelligence and is mildly amusing, but the show doesn’t once take off and soon starts to sag.

Maybe it’s because ‘this nice, cosy aircraft carrier’ as he describes it, is less than half full. It’s hard to get an atmosphere (and, therefore, his comic adrenaline) going when the biggest response is a low rumble of chuckles. On the other hand, this did mean we got moved from right at the back to somewhere around the middle. I still found myself staring at the video screen rather than the guy beneath it, though. Why do people go to see comedy in an arena? For a night out with friends, I suppose. In every other respect, it would work better on TV.

He makes a frequent point of his forgetfulness and the show is awash with missed comic opportunities. For instance, there are crowd pleasing references to tax avoidance with Google, Starbucks and the Cayman Islands, but references is all they are: no jokes attached, certainly no biting satire. Are his political ambitions making him more careful in how he attacks his targets, in case caustic words rebound on him in the future? A shame if so.

A 50 minute set is followed by a 30 minute second half where the biggest laughs come for a section about dressage (well, there was one woman near us laughing very loudly). There are inspired flashes like ‘our bodies are like two weasels covered in gravy, nailed to the back of a tractor’ and some effective physical comedy.

The ten minute encore starts edgily, with drugs and the Tour De France, but descends into a tired Lord of the Rings routine. The sold out show may well be better, but this was Izzard on autopilot. Pity.