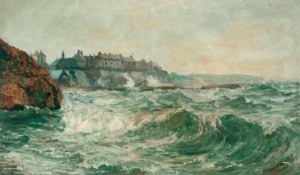 I can’t find enough time to listen to music at the moment. Don’t remember there being a better month for new albums since the 70’s, if then. Tomorrow sees the official release of Vampire Weekend’s stonking third album. Critics tend to say that the third album the key release in determining a band’s longevity, , and in the case of Modern Vampires Of The City, they’re probably right. There are also new releases by Primal Scream (their best for 20 plus years) and Rod Stewart, whose Time is his best album since the mid-70’s ie sincer I saw him with The Faces, 40 years ago this christmas, when they were on top of the world. Seriously. Have a listen to the song below if you don’t believe me. Seems that writing his autobiography has rekindled his passion for autobiographical songwriting. (On a sidenote, its quality makes me all the more annoyed that I was in an apartment with slow broadband when tickets for the opening night of his new tour went on sale, and couldn’t get onto the Nottingham Arena site. If anyone has a couple of spares…). This week also saw the release of the stunning debut by Savages, We Are Silence. It channels influences from 30 years ago, to great effect. I was teaching Tuesday night, when they played the Bodega Social, but I’ve heard a recording of their fantastic show. Next time.

That’s only the beginning. A week on Monday sees the release of the new album by my favourite band, The National, Trouble Will Find Me, and early reports say it’s their best to date. The album’s leaked, on MP3, but I want to wait and hear it first in its full, lossless glory, preferably on vinyl. The same day sees the return of Daft Punk, whose last two albums have been terrific and whose Get Lucky is the single of the year so far (stream here). If that weren’t enough, the same day sees the release of Laura Marling’s fourth album. Each of her albums has been a big step up from the last and I’m a big fan (as this review from a year ago, song still linked, indicates). But I’m deep in dissertation marking, with a novel and a comic script to rewrite and edit. Where will I find time to listen to all this stuff?

Luckily, we have an excellent Bose stereo in the car, and a big journey next weekend, for the 40th birthday celebrations of Iron Press in Cullercoats (tickets still available). The image above is ‘Stormy Sea at Cullercoats’ by John Falconar Slater, from the North Tyneside Council Art Collection. Looking forward to the performances and catching up with a bunch of old mates. Also looking forward to a loud listen to stuff like the two songs below. Enjoy.