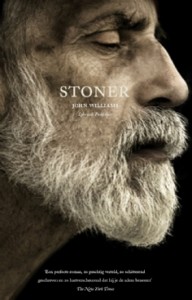 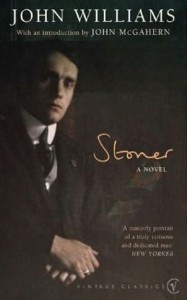 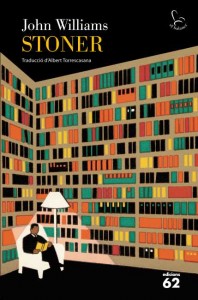 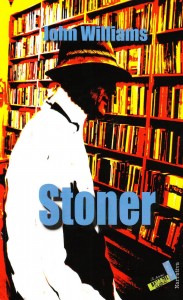 About three years ago, I heard mention of a novel with an intriguing title that had an introduction by one of my favourite writers, John McGahern. I got it and read a couple of pages. It looked well written but, rather… ‘a masterly portrait of a truly virtuous and dedicated man’ says The New Yorker on the cover. Sounds dull, doesn’t it? And the opening pages, about a Missouri farm boy heading to agricultural college, aren’t gripping.

Then I read this article about how Stoner, while little known in the US, was steadily gathering readers all over Europe (a selection of the translation covers above) and thought, I’d better give this another go. I finished it in 48 hours this bank holiday weekend. The novel was published in 1965, at the beginning of the psychedelic era, but despite its title, has nothing to do with drugs. It has more in common with another novel, published two years earlier, Richard Yates’ Revolutionary Road, which also took a long time to be recognised as the classic that it is. Stoner is, essentially, a campus novel, and one about the generation of men who preceded its author, John Williams, who taught at the University of Denver for thirty years (Stoner is set at the University of Missouri, where he did he PhD).

The cover quote is misleading, for Stoner is not an entirely virtuous or dedicated man. It’s only towards the end of the novel (slight spoilers in this sentence) that he becomes a good teacher and it’s ironically amusing to see him having to wrangle to be allowed to teach for an extra two years, until he’s 67, the age that lecturers of my generation are now expected to teach until. The portrayal of campus politics still rings resoundingly true. Funny how little universities seem to change. Mary McCarthy’s The Groves of Academe, written a few years earlier but set later, is more dated in style but still feels accurate. An interview that Williams gave close to his retirement, nearly thirty years ago (quoted by McGahern in his introduction) could also have been given this week, by one of my colleagues contemplating retirement. He complains about Literature being treated as something to be studied and understood rather than experienced. ‘It’s to be exegeted, in other words, rather than experienced?’ the interviewer Brian Wooley, asks. ‘Yes, as if it were a kind of puzzle.’ ‘And literature is written to be entertaining?’ ‘Absolutely,’ Williams replies. ‘My God, to read without joy is stupid.’

Amen to that. And this is a beautifully written, gripping, highly entertaining novel that deserves to be much more widely read. The less you know of Stoner’s story before starting it the better, but let me say that, while acute on English Literature lecturers, it is also good on love and has a character who is akin to, but more sharply drawn than Daisy Buchanan in The Great Gatsby (the movie of which I mean to check out this afternoon – hesitantly, as it’s one of my favourite novels).

Talking of movies, I kept imagining Michael Shannon from Boardwalk Empire (also to be seen in this month’s excellent movie, Mud) as Stoner, with his stolid yet anguished expression, and thick farmer’s hands. Interesting, too, that McGahern should help resurrect it. The protagonist’s farming background and the estrangement from his family that Stoner experiences must have had strong resonances in McGahern’s background. McGahern also points out that Williams only wrote four novels, each of them so different that you would not have known that they were by the same writer. I like that ambition in an author. Very, very few try. Hardly any pull it off.

One Reply to “On ‘Stoner’, John Williams, John McGahern & the campus novel”