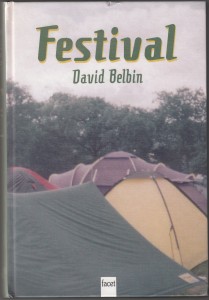 Was it really thirteen years ago? I had an idea for a novel and went to the Glastonbury Festival, the last year before they built the big fences. I wrote a long diary about it and, by the time I’d finished that, had a commission to write Festival. It was written as a YA novel but works fine as a short novel for adults too and, I was pleased to find when rereading it this year, most of the music references are to artists who still mean a lot today. Festival was my best selling YA novel this century, even without counting the free copies given away with every issue of Just Seventeen magazine ten years ago.

Why was I rereading it? Because the rights have reverted, so I am able to publish it as an eBook, with the brilliant East Lane Books, and it’s out today. Since becoming a university teacher, I’ve been delighted by the number of students who’ve told me how they read Festival prior to their first Glasto visit. One even told me that he used the map in the book as a way to get round! Which is a bit foolish, because aspects of the lay-out change every year. I’m happy to say that those nice people at e.festivals.co.uk let me use their map from the 2000 festival, so the map in the eBook is much better than the one with the original novel.

I’ve also written an extensive afterword, about the writing of the novel, which I hope that readers will find interesting. And, as an introductory offer, I’m making the eBook half price  until this year’s Glasto is over. That’s right, for the whole month of June you can get it for just £1.53: less than a coffee or half a pint of beer in a pub.

Festival is the only one of my novels that didn’t change titles in translation. Above is the cover of the Flemish version, published by Facet (rights to all other languages available!). In common with most YA novels, Festival didn’t get much in the way of reviews at the time (although it was runner up for the Leicester Book Award) and any reviews, anywhere, this time will be appreciated (especially on Amazon, where the old ones have vanished). Book bloggers can get in touch for a free copy. You’ll see that I have added a subtitle to this new version, to help with metasearches and the like. It’s now called Festival: The Glastonbury Novel. But I haven’t messed with the original text in the slightest.

Festival is published today on Kindle. Versions for other e-readers here. Here’s a song that makes an appearance at a significant point in the book.

One Reply to “Festival: The Glastonbury Novel”