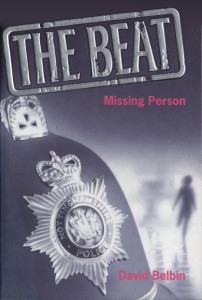 Over the last few months, I’ve been quietly publishing some of my Young Adult novels onto Kindle. The most popular so far has been the reissue of my 2001 novel about the Glastonbury Festival, but the time has come to go further back, to the early 90’s, with my Nottingham based series about young police officers, The Beat.

The Beat mysteries, while ostensibly a YA series, was aimed rather older and always had an adult audience. While there’s alway a teenage point of view character, the majority of the protagonists are in their twenties or older. Over the course of eleven novels, it follows the central character, Clare Coppola, from her first day on the beat to just after her twenty-first birthday and the end of her probationary period as a copper.

These days, The Beat would probably be tagged as a new adult series, a semi-useful definition for stories about people at the brink of adulthood that could retrospectively bring in all sorts of novels from The Catcher In The Rye on. But what I was doing at the time was pretty much trying to write my own version of Ed McBain’s 87th Precinct series, only set in Nottingham and – as the series progressed – more heavily focussed on contemporary social issues.

The stories also have a lot more emphasis on the characters’ social and love lives than McBain (or, indeed, my other big influences, the TV series Hill St Blues and Homicide). There’s a rubric at the start of every novel that begins the city in these pages is fictional, which is a kind of tribute to Ed McBain, to whom I sent a copy of the first book. He wrote me a nice note back saying that he didn’t own the copyright to the police procedural (no, he only invented it) and that Coppola was his mother’s maiden name. I was to meet him a few years later, but that’s another story.

So, here’s the rub. I’ve now published the first five novels on all ebook platforms and, to get the ball rolling, I’m giving away the first in the series, Missing Person, for the next five days (and, after that, it will only be 99p) ie Sunday August 11th, in order to get readers hooked. The second in the series, Black and Blue, has had its price reduced to £1.53, and the others are £1.99 (or equivalent), half the cost twenty years ago. The first five are available now and, presuming sales are half decent, the remainder will follow at regular intervals.

Since these books were published long before the existence of Amazon, there are currently only a handful of reviews accompanying them. If you enjoy any of them (or have read them before) I’d be grateful for any reviews that are left, no matter how brief. Oh, and, if you have read them before, you may still be interested to read the new afterwords, each at least 1000 words long, that accompany each new eBook edition.

Elvis Costello & The Attractions – The Beat