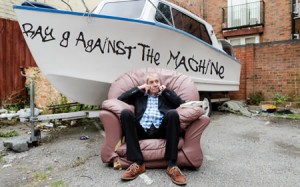 Ray Gosling died yesterday. Ray was a Nottingham hero, fighting for the community in St Ann’s in the 60’s, and a wonderful broadcaster on TV and radio. I only got to know him after the death of his partner, Bryn, at the turn of the century. He was a mess then, a shambolic figure who I’d see now and then in the co-op we happened to share, until he went bankrupt and lost his house. After that, he began a slow, partial comeback, with a bunch of TV documentaries about his life falling apart. My colleague John Goodridge, at Nottingham Trent University, saved his huge accumulation of papers from going into skips and established an archive. After I got a job at NTU, running the MA in Creative Writing, we invited him as a  regular speaker for years, until the drinking got out of control. The students loved him, even when he was clearly below par, and he always gave of himself with generosity, good humour and insight. He was aware of his own legend, but not that interested in it. He wouldn’t suffer fools and was awkward with academia, but he was fine with naivety and inexperience. He even gave the students pieces for their annual anthology, which they were proud to publish. If you don’t know Ray’s work I urge you to check out his broadcasts and his two terrific 60’s memoirs, Sum Total and, particularly, Personal Copy. The photo above is from a recent Leftlion, where you should read Ray’s final interview with my friend James Walker, who seems to have found him on good days. It includes TV clips.

Ray told me more than once that he ‘ran on alcohol’ and was determined to drink himself to death, which took him – I think – longer than he expected and led to some rotten scrapes, including a deeply embarrassing one that the BBC should never have broadcast, an incident that probably hastened his decline. Unless you were one of his hard-core drinking buddies, he was hard to get hold of and not easy to talk to when you did find him in the last few years. But he still had his moments. In January this year, a friend and I went to see a showing of ‘Two Town Mad’, his fine 60’s documentary about Leicester and Nottingham, at Lakeside. I was surprised to see Ray billed as appearing and not surprised when Djanogly director Neil Walker apologised for the late start and Ray’s absence. Yet, as Neil was speaking,  a loud, familiar voice boomed in the foyer. Ray wandered in, sharply dressed and relatively sober. He introduced the film and stayed for a q and a afterwards. He was in good form, but lost his thread after a while. I tried to help by filling in with a question. He turned to me with a stern ‘No!’ then found his conclusion. He did answer my question at the end, though, eloquently explaining why, yes, he still thought that the North of England began in Nottingham, on the city side of the river Trent. Nottingham, his adopted city, which mourns him today.