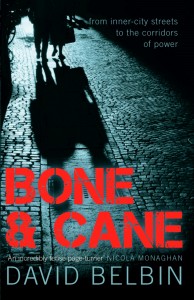 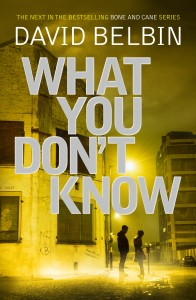 If you’ve been waiting for a cheaper, mass market edition of the second Bone & Cane novel, What You Don’t Know, you’ll have had a long wait. Sadly, its publisher, Tindal St Press, went under 15 months ago. If you want a paper copy, I’d get a move on, as the book sold out its print run, but there are still a few around. In the meantime, the ebook edition has remained at an artificially high price, nearly eight quid. And there’s been nothing I could do about it. That’s the bad news.

The good news is that, as of last week, I have the rights back to both Bone & Cane novels and they’re available again at bargain prices – for a limited period – just £2.99 for the second, What You Don’t Know (£10 off full price). So if you’ve read the first but not the second (which most readers seem to think is at least twice as good as the first – it has 10 out of 12 five star reviews on Amazon), now is the time to check it out. And please, please leave a review if you can make time. Reviews make a huge difference to sales.

And yes, the third Bone & Cane novel, The Great Deception, is finished and being sent out to publishers (if you’re a commissioning editor and want putting in touch with my agent, message me using the contact form above). Meanwhile, I’ve made the first in the series, Bone and Cane, available for a mere 99p to get people hooked on the series. It’s already been a bestseller (number one on Amazon’s fiction chart across three weeks, then number one again when it was a Kindle deal of the day). Frustratingly, because of publishing problems, What You Don’t Know hasn’t had the chance to reach the same audience. So please check it out, and spread the word.

By the way, don’t read the above as criticism of Birmingham’s Tindal St Press, who did a brilliant job of promoting adventurous writing from outside London. They were a victim of Waterstones’ near collapse two years ago. I’m still in regular touch with found Alan Mahar, who I had dinner with this week and my terrific editor, Luke Brown, whose first novel My Biggest Lie comes out from Canongate on April 1st. And, while, What You Don’t Know didn’t find its way into many shops, the lovely but expensive trade paperback did its job in terms of getting reviews in the broadsheets. So I’ll conclude this post with extracts from two of them and an Amazon review, to give you a flavour of the story.

‘It’s a story rich in resonance: of how New Labour sold out, leaving the children of cities such as Nottingham easy prey for organised crime; and a perceptive study of how the abuse of girls like Jerry is fuelling one almighty tinderbox.’ Cathi Unsworth – The Guardian.

‘Belbin’s novel is fast-paced, combining Westminster intrigue with local politics in Bone’s Nottingham constituency, where her old flame Nick Cane is trying to get his life back on course. Bone’s own problems multiply when her current lover is found dead in his flat in London, and the two plots entwine in a smart novel that recreates the heady atmosphere of Labour’s first months in power.’ Joan Smith – The Times

This Amazon review that explains how the novel differs from a conventional crime novel and can be read without knowing its predecessor:

Don’t think you need to read Bone and Cane before enjoying its sequel; as a newcomer to Belbin’s series I found it considerably easy to slip into. We arrive on the scene with MP Sarah Bone and her one-time lover Nick Cane, recently out of prison for drug dealing, at polar opposite ends of society. Sarah is busy grappling with her position as Prisons Minister as Nick struggles to reattach to life outside whilst steering clear of drugs. If you feel you’ve missed the boat on the pair’s past, don’t. Heaps have happened, but most of it has actually become a taboo subject between the two, which leaves you to get on and enjoy the novel on its own.

What this sequel offers is an engaging look back at the current affairs surrounding 1997 and the beginning of New Labour’s rule. It’s a gutsy task, but Belbin balances the real politicians with the fictional jerks whilst letting you have a private titter at our nostalgic, ape-like knowledge of mobile phones only possible in the 90s.

If you think the politics might put you off, or you feel you’ll be reading out of your depth with all the hustle and bustle of the government system, don’t worry either. It’s only one thread of the plot that unravels, and is punctuated by the grittier bites of reality from Nottingham’s drug underworld – mainly through snapshots of a teenage girl’s life that teeters toward prostitution and drug addiction thanks to her adult `lover’.

That’s not to say the bottom rungs of society are the only places for drug use and the odd scandalous affair. Plenty are found, and everywhere; it’s a trope that keeps each character so murky.

The underworld you think you’ve come to know springs up new revelations until the very end. As you can expect from an intelligent crime novel, all the dots connect but in a different way from your average `whodunit’ thriller. New to the genre or not, it’s definitely worth your time.

No, I don’t know the author of the above. If I did, I might ask him or her why they only gave it four stars rather than five. Not that I’m complaining, you understand, just curious. A bunch of one star reviews for the first novel have left it languishing at 3.5 stars, by the way. A few better ones to push it back up to four would be much appreciated. And, with that, the self pimping ends. Normal service will be resumed soon, in an interview with a singer/songwriter who I last interviewed 36 years ago. Can you guess who?