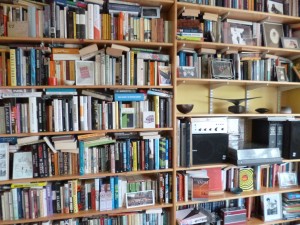 If Jenny Diski has got it right (and she usually does), the ban on UK prisoners being sent books in the post actually happened back in November 13, but has only gone viral this month. That was because of an article by Frances Crook, Chief Executive of the Howard League For Penal Reform, to which I belong. Good for her. The Howard League are taking legal action (donate), with Geoffrey Robertson QC, to challenge the government’s perverse decision to treat books as some kind of luxury to be denied to prisoners as part of their ongoing commitment to retribution rather than rehabilitation. There were a bunch of very good letters about this in last Thursday’s Guardian (including an excellent one at the top by Beverley Naidoo, who has just sent me details of her new book about an anti-apartheid campaigner, Neil Aggett, who died in prison in shocking circumstances) so I’m not going to bang on about its obvious idiocy in this blog (this is the latest news). Here’s my Shelfie, to complete a trio of postings, the others being on facebook and Twitter. Above is most of the Fiction (except the First Editions bookcase and the… um, overflow that covers a wall in the garage and another to the right of this wall). I managed to get most of the bookshelves in, apart from the top left. You can also see a record player, family photos, some pots (including two rather fine Antonia Salmons) and pictures by friends. What you can’t see are the two long rows of 7″ singles that cover the length of the floor, about 2000 of them.

Tim Hardin – You Can’t Judge a Book By Its Cover