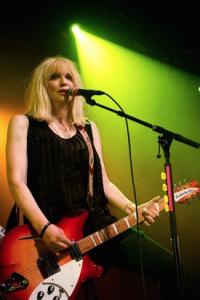 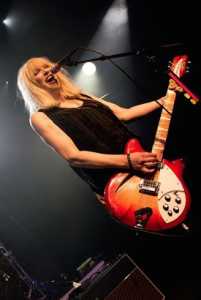 This year’s big gig week stretches over nine days in two weeks, concluding with the Flaming Lips at Rock City, a gig downsized from the arena. There seems to be something of a music oversupply in Nottingham at the moment, with last week’s Albert Hammond Jr (Strokes) show at the tiny Bodega far from full. Last night, it looked like there were little over 500 people at Courtney Love. What follows is a slightly extended version of my review for the Nottingham Post. Because sometimes, even 400 words aren’t enough, and I wanted to say a couple of things that don’t belong in a newspaper review, like the above. Photos from the Post report, by Laura Patterson, to whom, thanks.

Nineteen years ago, Hole played Nottingham, touring album Live Through This, released the week of Kurt Cobain’s suicide. It remains a stone cold classic. 1995’s show ended abruptly, with a power cut during the introduction to show closer ‘Rock Star’. Kurt’s widow was too rock’n’roll to come back on when power was eventually restored, so she owes us. I used the gig in a Beat novel published the following year, Asking For It, though, because those novels weren’t set in any specific year, I was coy about naming bands. I think I referred to her as a ‘celebrity widow’.

Arriving on stage to Ravel’s Bolero, draped in a lace scarf, Courtney opens with a snippet of ‘Pretty On The Inside’ then goes straight into stonking new single, ‘Wedding Day’. Her all male band are tight and raucous, making talk of a Hole reunion superfluous. ‘Mummy’s feeling ropey’ she says, but a riotous ‘Miss World’ suggests otherwise. An early ‘Jennifer’s Body’ (Live Through This provides the heart of the set) is equally good.

The surprisingly small, mostly female crowd is young and incredibly enthusiastic, knowing all the words to songs like ‘Plump’ and ‘Malibu’ (‘time for a hit’ she says before this song from her most radio friendly album). Courtney waves her underarm ‘Let It Bleed’ tattoo at us, tries to persuade us to get drunk and vapes: ‘aren’t you jealous that I’m getting nicotine and you’re not? If it kills me, it kills me.’ She refuses to stage dive. ‘The ’90s are so over. It never works.’ Then she says anybody is welcome to invade the stage, provided they can get past the hefty bouncers at the front.

Just when you think the show can’t get any better, she goes into ‘Rock Star’ (often known, confusingly, as ‘Olympia’) and hits another gear. No power cut this time. We’re treated to a number she’d refused to play earlier (oh, alright, it was me who called out for it). She said then that they’d already done it in soundcheck, but this time explained that the Guardian review had put her off playing this version of B side ’20 Years In The Dakota’, about John and Yoko, with inserts from the Beatles’ ‘Hey Jude’. It’s fantastic. Love’s sensational reputation means that people tend to forget how strong her songs are – melodically, as well as viscerally, and how conscious she is of her place in rock’s rebel tradition. But not anybody who was at this show.

Courtney mounts the monitors for ‘Letter To Go’ and rips through ‘Skinny Little Bitch’ before a superb ‘Asking For It’ (the song which provided me with a novel title and Live Through This with its title). Then an equally good ‘Violet’. She tries to get the band to do another song that isn’t on the setlist, but her young guitarist says he doesn’t know it. ‘It’s only three chords, how hard can that be? OK, stick to the setlist.’

Boy, can this woman scream. The crowd are mostly much too young to have been here in ’95, but see an artist who’s in just as good form. You can’t take your eyes off her. She swears like a trooper, flaunts her bust, smiles a lot, makes cracks about all her designer labels and Kurt’s estate looking after her expenses. ‘I’m fifty next month. Hold on, Mommy needs a drink.’ ‘Celebrity Skin’ is a storming show closer.

Courtney hands out red roses at the start of the encore, drapes her lace scarf round herself like Stevie Nicks (Fleetwood Mac’s Gold Dust Woman was played earlier), then sings a powerful ‘Dying’ from the top of a monitor. A politically incorrect curveball quietens the crowd: ‘He Hit Me (And It Felt Like A Kiss)’. I’ve always been fascinated by this cult classic, which Carole King and Gerry Goffin wrote for Phil Spector (and which Hole first did on MTV Unplugged in 1995). A terrific ‘Doll Parts’ brings the 85 minute show to an end. Magnificent.