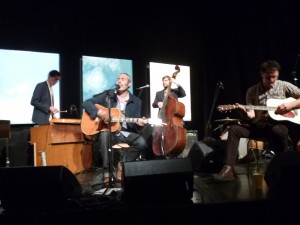 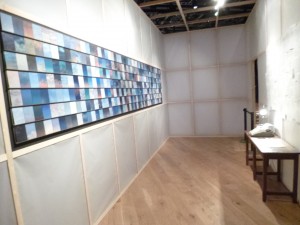 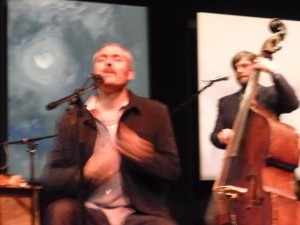 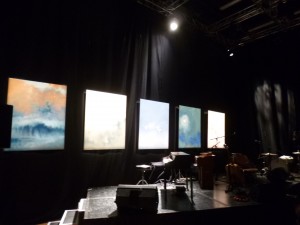 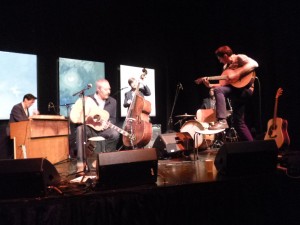 It’s 11 years, almost to the day, since Tindersticks last played Nottingham, their home town. The band formed in 1991. Their second slimmed down line-up, going since 2007, has never performed here. Until tonight.

They’ve never had a hit single, nor courted one. Their unique music is hard to describe: a lugubrious, Leonard Cohen meets Bryan Ferry voice sings melancholy lyrics over a band who sound anything but British. A hint of Australia’s The Triffids is blended with a jazzy French lounge band and a few spoonfuls of Philadelphia soul.

Tonight’s semi-acoustic, instantly sold-out show at Nottingham Contemporary accompanies ‘A year in small paintings – Singing Skies, September 2010 – September 2011′ a fine, brief exhibition of Turnereque sky paintings by Suzanne Osborne which work in tandem with lyrics by Tindersticks’ singer Stuart A. Staples, who happens to be her husband.

The band begin with three songs from their debut: ‘Patchwork’ (“written in front of the Victoria Centre”), Her and a beautiful, virtually solo ‘City Sickness’. ‘She’s Gone’ is terrific, ‘Bear Suit’ remarkably good.

It becomes apparent that the five piece band are working through their albums chronologically. Keyboard player Dave Boulter swaps instruments adroitly. Guitar player Neil Fraser mounts a chair on occasion. Dan McKinna plays lovely double bass and Earl Harvin’s drums are effective while unobtrusive. Stuart even provides handclaps on a joyous ‘Can We Start Again’. ‘Dying Slowly’, which follows, is as powerful as ever.

“We’re into a new century now”, Stuart points out with ‘Sometimes It Hurts’, dedicated to the late Lhasa De Sela, who duetted on the recorded version. The set concludes with a song written in Nottingham quite recently, ‘This Fire Of Autumn’.

They tear up the scheduled encores and play two requests. “Yes, it’s got to be that one,” says Stuart to my request for ‘Tiny Tears’, so the set concludes with their best known song, used in the first series of The Sopranos and, Stuart tells us, written in Laurie Avenue, Forest Fields. A moving ending to a superb 85 minute set, with a full, rich sound, that did the Contemporary proud.

No photographer was available so I agreed, despite my limited skills, to take a few snaps. Above you can see the beautiful Singing Skies backdrop (designed, I think, by director Claire Denis) and the Wolfgang Buttress installation that contains the pictures, lyrics and a typewriter (we weren’t allowed inside last night, sadly, and it’s being dismantled as I type). I was in the middle of the front row and didn’t use flash, so couldn’t focus close-ups, but I was able to grab a copy of the setlist that Stuart kept glancing down at throughout. When I looked at it on the way out, I saw why. To some extent, the set was made up as they went along. There are plenty of alternatives (in brackets), some of which were played (e.g. CWSA) while others weren’t (e.g. the encores). Some songs towards the end that aren’t in brackets were dropped, too. An interesting insight for Tindersticks fanatics, some of whom were sat next to me, so I include it below, along with the song that turned me onto the band in the first place, which I hadn’t heard live since the first time I saw them, in Sheffield City Hall’s dingy underground ballroom, back in the 90’s.

Last night’s was as good a Tindersticks gig as any fan could hope for, and well worth the long wait. Now I’m off to open my copy of the book Singing Skies. 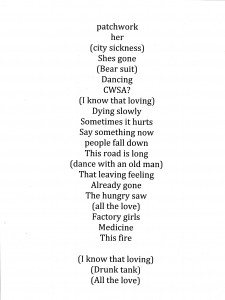