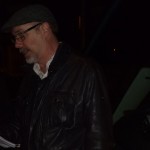 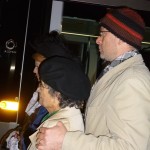 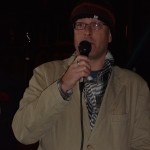 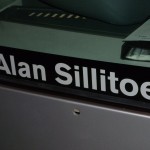 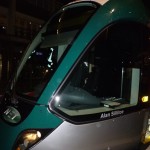 Yesterday we launched Nottingham’s attempt to become accredited as a Unesco City of Literature. I chair the board of the company set up to do this, which is a great honour, and a pretty daunting job. It was an even bigger honour to be asked to speak at the launch of Nottingham’s newest tram, named after the great Alan Sillitoe. Many of the guests at the launch were able to attend the naming ceremony at the Forest tram stop, chosen for the spot’s significance in Alan’s work. When we were done, we took the tram into the market square for the launch event at the Council House. 5.30 was too early for some, but there will be video of the whole event on the Nottingham City of Literature website. Sue took some photos, above. And here’s the speech I gave, after a fine introduction by the Sheriff, Councillor Jackie Morris and a lovely speech by Cllr Dave Trimble.

We’ve chosen to name the tram in this spot because here is almost exactly the site of a long, pivotal sequence in Saturday Night and Sunday Morning – the film and the book. In both, there’s a great Goose Fair scene set on the Ghost Train. It should be pointed out that, while Alan wrote the screenplay, he simplified events for it. In the film, Arthur Seaton is only seeing one married woman, and gets beaten up for his trouble. In the novel, it’s a pair of sisters, Winnie and Brenda, who he’s carrying on with. Both their husbands are right here, at Goose Fair, when they spot Arthur with the pair of them, one on each arm. He’s pursued but narrowly gets away – for a while.

I bought my copy of Saturday Night and Sunday Morning at a second hand emporium on the boulevard down there, thirty odd years ago, after finishing at the University of Nottingham. It was set in the Radford streets I’d come to live in, still very recognizable in the early 80’s. A lot of them, but by no means all, long gone now. In my first job, at a Nottingham school, I used to teach Alan’s short stories to fifteen year olds. Tough kids, quite often, who weren’t that keen on reading, so I’d read The Ragman’s Daughter out loud to them. It’s a long story, takes at least 50 minutes to read aloud, but they were always engrossed by it, by the power of Alan’s words, his storytelling skills and his brilliant depiction of the city we all knew so well. I’m sure loads of other teachers were doing the same thing, and not just in Nottingham, because we had a special schools edition of Alan’s early stories.

These days, I teach at Nottingham Trent, our other great university. The final lecture for all of our first year English literature and creative writing students is one I give on Saturday Night and Sunday Morning. At the end of it, I ask them to do some writing about Nottingham and the Market Square, where we’ll soon be heading on the tram. Then they go off to a seminar where they investigate the artistry, intelligence and complexity that went into Alan’s portrayal of Arthur Seaton and his world. Those students come away knowing that they’re living in a real city of literature, one that Alan Sillitoe will always be an integral part of. And, from tomorrow, the can travel to their lectures on a tram bearing his name.

Over the years, I was lucky enough to spend some time with Alan. He was always keen to support Nottingham writers, both me and my students (here I adlibbed a mention of Nicola Monaghan, who was standing nearby and whose The Killing Jar Alan was keen on). One of the first things he said to me was ‘this city will take care of you’, and he was right. This city does take care of its writers. It honours them, as we are honouring Alan today, and it supports them, in all sorts of ways. Many of us want to give something back, and that’s why we’re here this evening. To celebrate Alan and to celebrate Nottingham. We know that we’re a truly international city of literature and we’re going to prove that in our bid to become a Unesco Creative City of Culture.

It’s a great honour to stand here with Alan’s family. His wife, the great poet Ruth Fainlight, will be unveiling the name plate in a few moments, but first I’d like to introduce Alan’s son, David Sillitoe. David, so glad you could make it.

David then made a great, short speech before handing over to Ruth for the unveiling. I hope it’ll be online soon.

3 Replies to “A Tram Called Alan”