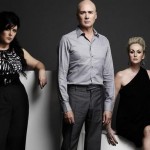 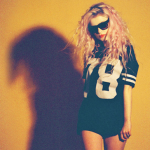 33 years after Dare, The Human League retain their core members, Phil Oakey, Joanne Catherall and Susan Ann Sulley, supplemented by additional members who’ve been with them longer than the 80’s version of the band lasted. People come expecting a well oiled machine with all the hits plus a couple of recent songs. I’ve never known them disappoint.

There’s one surprise tonight, though: their choice of opening act. Nottingham’s Ronika is doing the whole tour. Her updated 80’s pop/disco sound couldn’t be better matched to the main act.

She comes on with ‘Ey Up, Nottingham!’ Wearing Adidas shorts and dark sunglasses for her RCH debut, she’s become more confident since I last saw her at the Bodega in early summer. Her banter with the crowd is relaxed, and includes a dedication to the much mourned music store, Selectadisc, that she’s named her debut album after.

Sunglasses off, she introduces her tight band as Hot Tap, Cold Tap and Smooth Basin. The last three numbers, in particular, are killer: Automatic, 1001 Nights and Search Siren. The latter concludes ‘Don’t Let This Be Over Too Soon’, but, sadly, after half an hour, it is. It’s hard for the sharpest pop act to break through in an overcrowded market heavily focussed on youth, but this tour will earn her a lot of new fans.

If you think Nottingham music is currently in the ascendant, think back to Sheffield 33 years ago, with ABC, Heaven 17 and the all conquering Human League. The League’s backing band come on to the staircase set and crack into the opening beats of Mirror Man, one of their biggest hits. The sound is great. Then something happens that I’ve never seen here before. The whole stalls are on their feet before the band even take the stage.

Phil Oakey is in futuristic shades while Susan and Joanne are in white, hair up, each looking like the Goddess of Nemi. The shades come off after Sound of the Crowd. It’s followed by two strong songs from their recentish album Credo, with Heart Like A Wheel in between. The ‘girls’ leave for Seconds, returning with a costume change for a trio of songs from Hysteria: The Lebanon; the often under-rated Life On Your Own (Phil and Susan argue over its chart position and Phil gets it right: 16); and Louise. The inclusion of the latter, sadly, always means we won’t get their best ballad, Human.

After that, it’s big numbers all the way, including Love Action, Open Your Heart and Fascination. The three leave the stage for a costume change, and during the next song’s extended intro, even the entire upper balcony gets to its feet. The song is, of course, their only number one, Don’t You Want Me.

First encore is the traditional early number. This time, The Path Of Least Resistance, from Reproduction (which I failed to recognise!). The 80 minute set concludes with a resplendent Together In Electric Dreams. Nottingham Lace (OK, Adidas) met Sheffield Steel and we all went home happy.