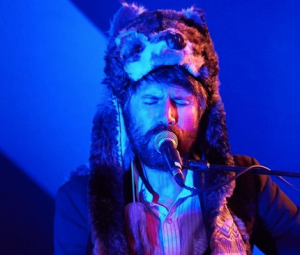 A slightly extended version of my Nottingham Post review.

In the 18th century, a Welshman called John Evans crossed the ocean to America. He was searching for the mythical tribe of Prince Madoc, Welshmen who mated with native Americans and were the USA’s first European settlers. Two and a bit centuries on, his distant relative, lead singer of popular Welsh band The Super Furry Animals, has written a concept album about him. It’s also an app, and a movie, and a very enjoyable book. All of them are called American Interior.

Gruff, in fur trapper’s hat, takes to the stage at five to eight to introduce a quirky ten minute film that gives the background. Then Gruff and his four piece band begin, bringing with them a large felt puppet of, yes, John Evans, wearing a pirate’s hat. Gruff took this figure round the US with him. The story is in the well-researched book, shortlisted for the Guardian first book award, which, unlike tonight’s show, is also a travelogue.

What follows is part gig, part powerpoint lecture. And it works superbly. Rhys is a hesitant raconteur, with a dry, laconic wit (eg Evans’ family move to a hovel so poor it only has dial-up internet). He has a story full of twists, tall tales and escapades that takes us from London to New Orleans. All interspersed with ravishing pop songs like the title track and Hotel Shampoo’s ‘Shark Ridden Waters’ that recall the Beach Boys and the psychedelic Beatles of ‘Strawberry Fields Forver’. No spoilers, but it doesn’t end well.

After 90 minutes, Rhys finishes the tale. More silliness, as signs tell us when to applaud, and how hard. ‘Now we’re ready to start the gig’. We think he’s joking. But, no, he plays ‘100 Unread Messages’, which sums up the whole journey, then encores right up to the curfew, ending with ‘Sensations In The Dark’ and a lovely ‘Year of the Dog’. Terrific.