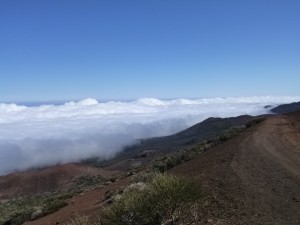 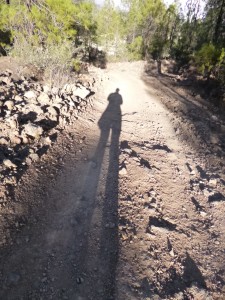 Time for my annual reading blog. Spent most of the last week above the clouds, at the edge of the El Teide national park in Tenerife. The photo above was taken just below the space observatory there, near the volcano that is the highest point in Spain. The clouds are so close that sometimes it feels like you can walk out onto them (see first photo). But when you find yourself driving through then, they become dull, wet mist. We didn’t take any CDs for our hire car, or I would have been playing my Calexico collection to death: felt like we were driving through a Western movie. I associate Tenerife with overbuilt resorts, and on our drive back to the airport we passed some horrendous looking ones, but the middle of the island is great for walking and exploring (the photo on the right was taken on a long walk one golden evening, hence the shadow).

Did plenty of reading, too, beginning with a proof copy of Babbicam by Rod Madocks, which is published on May 21st. It’s an ambitious, absorbing novel about the life of John ‘Babbicombe’ Lee, the man they couldn’t hang, despite being found guilty of a double murder that he may not have committed (readers of my generation may recall that Fairport Convention made a concept album about him). The century old aspects are interwoven with a modern day story about an American poet who finds wire recordings from Lee’s last days in which he gradually reveals what really happened. The Lee sections are more interesting than the modern sections and the two could have been integrated better (the book trails off towards the end) but it’s a fascinating story, a remarkable reconstruction of a legend with some top notch writing.

The finishing touches are being put to my Dawn of the Unread story about Stanley Middleton and I’ll have more to say about this tomorrow. I took with me a 1968 Stanley novel, the only one of the six recent Windmill reissues that I hadn’t already read, The Golden Evening. 60’s Middleton’s are very hard to find, and ridiculously expensive, so this is  the most essential of the six in one sense. In another sense, it’s the weakest, with a very slight plot (PhD student’s mother is dying, meanwhile his fourteen year old sister is being seduced by a 19 year old undergraduate and he, a virgin, is about to marry a divorcee three years his senior). Nevertheless, it’s an absorbing novel that has stayed with me, particularly for its detailed passages about sex, which Stanley never flinched from, and which are pretty frank for their time (1968, although the world they describe is closer to 1958 – Stanley was never bothered about making his novels feel contemporary, and they become steadily more dated as he gets older). The way he deals with his hero’s sexual awkwardness reminded me of Ian McEwan’s On Chesil Beach, only more convincingly done.

Initially, Jonathan Coe’s Expo 58 suffered in comparison with the Middleton novel – the world it depicts is so obviously a made up version of one that Middleton knew well. Jokes about bad food and smoking to help your health. But once Coe gets to Brussels and the EXPO it becomes a lot of fun. If the plot machinery grinds rather loudly in places, who cares? A good holiday read.

My best holiday read, and one that I finished on the walk with the long shadow photo, was Geoff Dyer’s Out of Sheer Rage, a book about trying to write a book about DH Lawrence. I first tried to read this twelve years ago, just before Dyer came to talk to the MA I teach on. I didn’t know his work, and found the book hugely frustrating (as it’s meant to be, if you’re reading it to find out about DHL, rather than Dyer, though he has good things to say about Lawrence, too). It was frustrating in a different way to hear Dyer speak, as his life mirrored mine very closely, and I declined Graham Joyce’s invitation to join them for a drink because I didn’t like the idea of one of those ‘me too’ conversations. But I’ve since become a big fan, and this is probably his best book, a very funny memoir. My only complaint is I bought it on Kindle and it ends at 85%. There I was, thinking I had forty minutes’ reading left, when all I had were 5% of notes and 10% of preview for ‘Another Day At Sea’.

Saved the crime reading for the end. We had a long wait at the airport, where I began Carlo Lucarelli’s The Damned Season, which I’d picked up in a hotel in Majorca last year – free! – but didn’t read, as it turned out to be the middle novel of a trilogy. However, I like Lucarelli a lot (Almost Blue is great), so I bought book one, Carte Blanche, a couple of weeks ago, and it was very good: short, tight and engrossing. TDS is nearly as good, if a little more predictable. It ends on a cliffhanger. So what do I find when I try to order the final book, Via Delle Oche? Only that it’s out of print and second hand prices start at just under forty quid. Not one Notts library has a copy. Curses.

The De Luca series is set in the confusion of Italy at the end of the Second World War. Each is very short, so I had time on the flight to read the latest Donna Leon mystery, By Its Cover, set in present day Venice,  Leon publishes one a year, which is the commercial thing to do, so that fans like my partner will know there’ll be a new one waiting for their next holiday. I haven’t read one for a few years, but this was about theft from libraries, a good subject and as well written as all her novels. The plot is a little slight but it’s economically done. I finished it just after the plane touched down.

And that, apart from vast swathes of New Yorker articles, was that. Unless you count one I haven’t finished yet. I’d heard good buzz about a new book from one of my favourite crime writers, Lawrence Block, Tcool, but when I looked it up online, there were no results. Then, when I finished the Dyer, I saw that the next book on my Kindle was Larry’s collected writings about crime, The Crime of our Lives, the acronym for which is – you guessed it… So I devoured pieces over the next two days, including a gap between crime novels on the way home. Block writes so well that even the stuff that has clearly been produced quickly and casually slips down easily, but there were a couple of things I was surprised he’d included (that Ed Gorman intro, please, no…) and quite a lot of repetition. I was sent this book for free (as I was the Madocks, for which I supplied a cover quote) and worried that I wouldn’t be able to recommend it wholeheartedly, except to completists. Then I got to the heart of the book, the long Mystery Scene magazine reminiscences of Evan Hunter, aka Ed McBain (whose 87th Precinct series was one of my biggest influences as a beginning crime writer) and Larry’s time working for a literary agent. Both are full of terrific tales, ones that don’t flinch from the more salacious side of both men’s lives: in particular, Hunter’s sex addiction, which is strongly suggested by some of the novels (and which, I should add, seems to have ended with his marriage to his third wife, Dina – the pair were like loved-up teenagers on the one evening I spent with them). There’s probably plenty more good stuff in the 45% of the book I’m saving for later, but – take my word – the book is worth whatever price the publisher asks for these two long sections alone.

I’m off to do some bargaining on eBay for a tatty copy of Via Delle Oche, but I’ll be back tomorrow with more about Shelves.