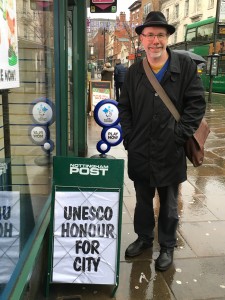 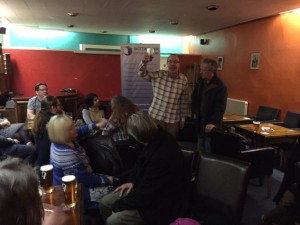 We didn’t think we’d done it. And we were OK with that. The eighteen months we spent working on our bid to become a UNESCO city of literature made so many things happen that, in a way, we’d already won. We encouraged so much creativity and civic pride, engineered numerous events and several publications. The process of putting together the bid in itself helped the city’s literature scene to become more joined up. And we made a start on the biggest task of all, using Nottingham literature to improve the city’s literacy.

But UNESCO accreditation – a permanent honour – is a big ask. We knew from the start that the odds were against us. We were told that UNESCO wanted to reach into continents other than Europe. Fair enough. There are already two great UNESCO Cities of Literature in the UK. Nottingham’s literary infrastructure we could improve, and we did, but we’d never be able to show that we had a literary economy the size of Edinburgh or Norwich, because we don’t and won’t, no matter how you dress it up. The bid call, when it came, required us to answer a lot of difficult questions in a smaller space than expected, and only gave us two months instead of the three or four we thought we’d have. This made it hard to put our best foot forward. No matter how good your bid writing team – and ours, I’m happy to say, turned out to be very good – we were up against it.

Keep on keeping on Alan wrote in my copy of Saturday Night and Sunday Morning a few months before he died, and that’s what we did. We made sure that our bid reflected as accurately as possible the unique literary character of our city, its independent, contrarian spirit and enormous outpouring of energy in this most financially challenged, iniquitous of times. For me, the fifteen months since we set up the company to make the bid and I was asked to chair it have been a steep learning curve. I learned a lot about myself, about handling, motivating and, yes, cajoling people. Most of all, I learnt what a vibrant, creative, diverse literary city we are, with more going on than I could ever have imagined. Undoubtedly a world city of literature. Didn’t mean we’d get the award.

This was a partnership and, in addition to all of the very many people in Nottingham who I will be thanking at length on our website, I want to acknowledge the stringent, detailed feedback that UNESCO UK gave us on the first completed draft of the bid, making the final version, which they had to approve and submit on our behalf, much tighter and more persuasive. We got it in a day before the deadline.

Even so, we doubted that we’d done it. On Friday, we expected the result between six and seven in the evening, At midday, I had my arm twisted to write a quote for the press statement to go out in should we win the award. I bashed off a quick paragraph to Matt Turpin, our Press Officer, for him to check and comment on. Then things got crazy.

Notts TV posted a story saying we’d got it. Shreya Sen-Handley, who was appearing on their 6.30 show that evening, tried to get hold of the press release they were referring to. My friend Jez came round for lunch (we weren’t meant to get the result for hours, remember). I could hardly talk to him because messages kept coming in. No, I couldn’t confirm it. Then I saw the press release. It looked kosher. Took me four goes to work out the right country code to phone UNESCO’s press office in Paris. I introduced myself and explained that I needed confirmation of what I was hearing. The woman on the other end began reading down a list, picking out names as she went down the alphabet.

‘Here it is,’ she said, ‘Nottingham. City of Literature. Congratulations.’

The rest of the day was pretty bonkers, as you can imagine. The BBC refilmed my interview at Bromley House Library which, I’m proud to announce, is now the new City of Literature’s official address (that’s me outside it in a photo above). The library and bid president and originator, Stephen Lowe, and many of our core team were there. Matt brought in a bottle of champagne he’d had no call for on General Election night, and we opened it for the cameras.

Later that evening, we had an celebration at Bar Deux, where I’d hosted the monthly Jazz and Poetry session two nights before and said could we have a room on Friday just in case. Many more of the people involved in the bid were able to join us. Stephen, Pippa and I gave short speeches (photo by Stephen Mumford above). The always over-committed James Walker, whose brilliant Dawn of the Unread project is so crucial to the bid and the literacy work we want to do in the future, arrived by taxi a little later. There was a benefit gig for Nepal in the Guitar Bar. At one point, Michael Eaton and I snuck out for forty minutes to watch a great set by the excellent Little Typists, with John Marriott’s dour, surreal spoken narration emphasising why Nottingham’s fantastic music scene is very much part of this city of literature, too. We didn’t quite drink the bar dry (Rob, we’ll settle up soon, I promise) but we didn’t hold back. Is there anything sweeter than being given something you badly wanted but were sure you wouldn’t get?

Front page of the Nottingham Post (who, with Leftlion, have been stalwart supporters of the bid) and a leader of congratulations! This weekend we celebrate I wrote in the publicity paragraph I thought we’d never send out and which I never got to rewrite. Next week, the real work begins. This afternoon, 48 hours after the result, I’m working on how to deliver the plans in our bid. It’s challenging, exhilarating and more than a little daunting. But we have a fantastic team of diverse partners with the will, talent and energy to do this. We have started to forge the international links that our new UNESCO status will bolster.

Our City of Literature will be inclusive and ambitious. The board meets on Thursday. We need time to get our infrastructure in place before we work out the most effective way to involve the many people who have offered to help. Don’t lose patience with us or expect immediate results. This is only the beginning. 2016 is going to be a very exciting first year for our City of Literature and will culminate in an expanded, exciting, more international Festival of Words in the autumn. Heartfelt thanks to UNESCO and everyone who has helped in so many ways. Much more on our official website.

Tomorrow, for regular readers who are used to my mainly banging on about music, will mark the beginning of my best of the year CD notes, which will appear below this post.

3 Replies to “Nottingham is a UNESCO City of Literature”