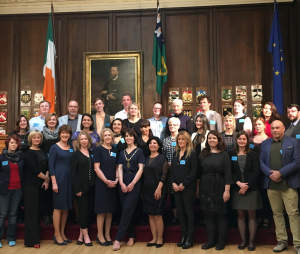 ‘City of Words’, I titled a recent article about Nottingham for The Author, but I’ve since discovered that, when it comes to UNESCO City of Literature status, Dublin coined this phrase some years ago! We’ve just been to the first conference for the Cities of Literature network, with seventeen of the twenty cities represented. This couldn’t have come at a better time for Nottingham, as we find our feet as a City of Literature and prepare to hire our first director (applications are open until June 13th). I’ll be reporting back to the board on a load of strategic areas and future possibilities when we meet this Thursday, but here are a few observations.

For a start, there are signs or window stickers that use Dublin’s UNESCO logo in every appropriate venue, reminding residents and announcing to visitors that they are in a Creative Literary city. It’s not expensive and we ought to do the same soon. Secondly, it was great to be in a big room (in the Pearse St library where the Dublin City of Literature offices are) with such a group of dedicated, creative, interesting people – mostly directors or employees of cities of lit, with one councillor (from the smallest city of lit, Óbidos) and two other chairs – Margaret from Dublin and Abigail who, like me, was covering for an unavailable director (congratulations to Edinburgh’s Ali Bowden, who has just had a baby daughter). I learnt a lot from them. That’s Celeste and Julita from Óbidos standing as JJ from Krakow, who coordinates the network, gives Dublin’s Jane Alger a thank-you present in the photo below. 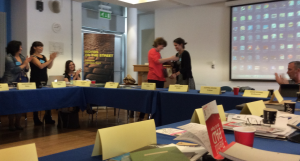 And I’d like to add my thanks to Jane and her team here, too. Irish hospitality is, of course, legion and we were looked after magnificently, put up in a great hotel opposite Trinity College, taken to a reception at the Mayor’s mansion (see photo above) and a meal afterwards, given a private tour of the Book of Kells and Trinity’s library, given a bus tour of Dublin’s literary sites, including the James Joyce Museum and tower  and the huge house where Samuel Beckett grew up, which was a stark contrast to the modest terrace that Seamus Heaney bought when he got a job as a Head of English and stayed in for the rest of his life. We also passed rather bigger piles belonging to Enya, Bono and Van Morrison. This is the door that Joyce climbed a ladder to get to when he went to stay with Oliver St John Gogarty in an episode that formed the first chapter of Ulysses (follow the link for a drawing of the top of the tower, where we went next, and took numerous photos, one of which is now my profile pic on facebook (this links to a photo album if you’re on there) and Twitter. That photo and the one below by Sue. 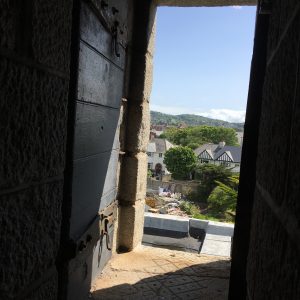 On the last night we forsook the literary pub crawl for a visit to the packed Trinity theatre for the first appearance in Western Europe of Nobel Laureate, Svetlana Alexievich, 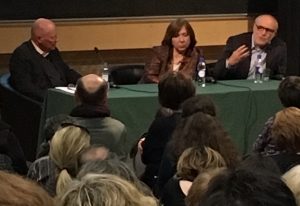 which was fascinating, then found our way to Keogh’s pub, where there was a traditional music session in an upstairs room and the Guinness was top notch. Thanks again to Jane and everybody in Dublin for hosting this very useful conference, that is bound to lead to new collaborations and which I hope will become an annual event, one that we can host one day. Two final points. Several people expressed concern about the state of UK libraries, which used to be seen as a beacon but are becoming regarded as a disaster zone (I repeatedly explained how Nottingham has protected ours, as befits our new status). And, finally, it wasn’t discussed formally, but in a group of talented people, primarily from Western Europe, all committed to creating international cooperation, there was general disbelief and much trepidation about the possibility that the UK might leave the EC and what the consequences might be for each individual’s own country. Just saying.