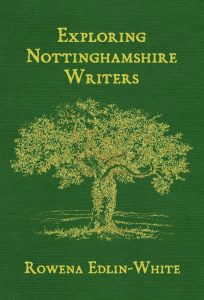 Hearty congratulations to Rowena Edlin-White, whose five years working on this splendid anthology (originally intended to come out before our UNESCO bid went in) was time well spent. Over 200 writers are discussed in this book, from David Herbert Lawrence to David Lawrence Belbin (no relation), with the living writers doing their own entry (some from beyond the grave, like Derrick Buttress, who sadly died this year). It’s a bargain, at £12.99 (or £25 for the signed, limited edition hardback pictured) and also includes several essays, on comics, the Forest Folk, Dickens in Nottingham (by Derrick) and Graham Greene in Nottingham (one of mine). I wish I had time to say more, and maybe I will, once I’ve read it all. Meantime, read this on our City of Lit site. So far, I’ve only got through the living writers, all but one of whom I know, to some extent. It’s also a delight that Sue and I are one of two living literary couples in the book, the others being our friends Stephen Lowe and Tanya Myers. I was in Five Leaves Bookshop (the publishers) yesterday, and Ross told me that they plan to publish an online appendix to include the writers who have emerged (and continue to emerge) since the book’s contents were finalised. I hope to see Mansfield playwrights James Graham and Beth Steel, both of whom have great work (I know, I’ve already seen both plays) in Nottingham next year, amongst many others, like Mukaro Makubika, whose Fagon award winning Shebeen opens next year, Anyway, that’s my book recommendation for Christmas this year. Music recommendations above.